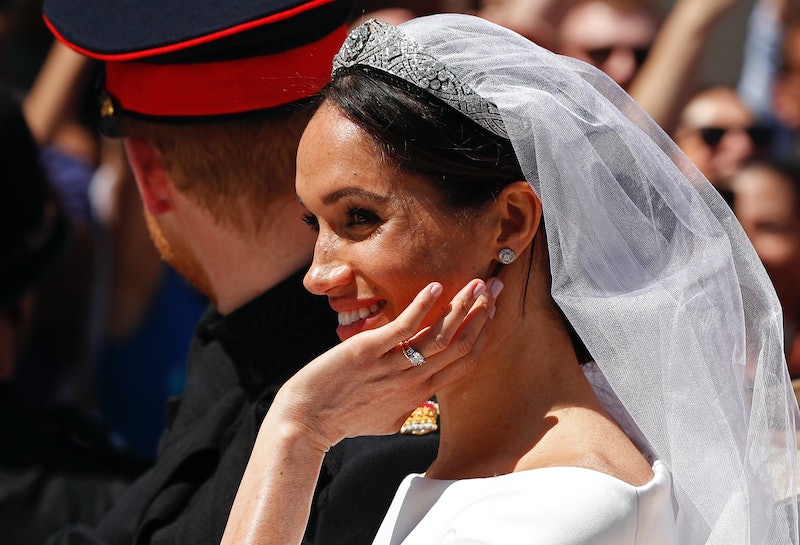 There was never any doubt that Meghan Markle would make a beautiful bride. There were sartorial curiosities and questions about the gown (she went with Clare Waight Keller for Givenchy), the hair (she opted for a low, center-parted, and messy bun), and the makeup (natural and soft). Meghan Markle's royal wedding jewelry was another topic of excitement. Here's the rundown of all of Markle's accessories, which were a mix of traditional, historical, and modern. She nodded to tradition as much as she broke with it.

The jewelry was classic, much like Markle herself. According to PEOPLE, she accessorized and complimented the boatnecked, long-sleeved, pure white column gown with Cartier diamond stud earrings. It was a smart choice, since she could show them off as she was wearing her hair up in a loose bun with flyaway bangs. She also chose a diamond bracelet from the designer, which she wore on her right wrist.

Markle also opted for a tiara with her veil. She wore the Queen Mary Diamond Bandeau. While her earrings, bracelet, and dress were modern and chic, her tiara was steeped in tradition. As PEOPLE reports, the tiara was loaned to Markle from the Queen's vault. Here is the tiara's origin story, which is pretty epic as it ushered years of history into the present day.

The small diamond bandeau was purchased by Queen Mary, the wife of King George V, in 1925. Upon her death, her daughter-in-law Princess Marina inherited the tiara.

The tiara has also been worn by Princess Margaret, who is the sister of the Queen.

Markle's ring, which was designed by Cleave & Company in London, was fashioned from the royal family's stash of Welsh gold. The stash of gold has been in use since 1923, when the Queen Mother wed. Her ring was also a gift from the Queen.

While Markle nodded to royal tradition with her head piece, she and her new husband broke with it, as well. She gave Harry a textured finish platinum band during the ceremony. Male members of the royal family don't customarily wear wedding bands — his brother Prince William does not wear one and neither does father Prince Charles or his grandfather Prince Philip. As The Metro reports, prior to the 20th century, the men nixed wedding bands. But during World War II, they began wearing them as reminders of the comforts of home.

Harry went against what the men before him have done by wearing the ring. It was also created by Cleave & Company.

The jewelry designer also made Markle's engagement ring, which holds serious significance. Prince Harry made sure to include his late mother, the beloved Princess Diana, in the ring. Diana, who died tragically in a 1997 car accident, was not only a style icon. She was beloved as "the People's Princess" for her work with the sick and the poor and for her relatability.

Harry sourced two stones from his mother's jewelry collection and incorporated them into the ring. The other stone was from Botswana, the African country of which he is extremely fond and which he visited with Markle last summer.

Lastly, while not a part of the actual jewelry, Markle's veil also had a powerful message and connection to her new home. As PEOPLE reports, the 16-foot veil was made of silk tulle and was trimmed with hand-embroidered flowers from all of the 53 countries that make up the British Commonwealth.

Since Markle's dress had a boatneck, it negated the need for a necklace. The diamond earrings and the tiara were certainly beautiful enough on their own. Like the bride herself.