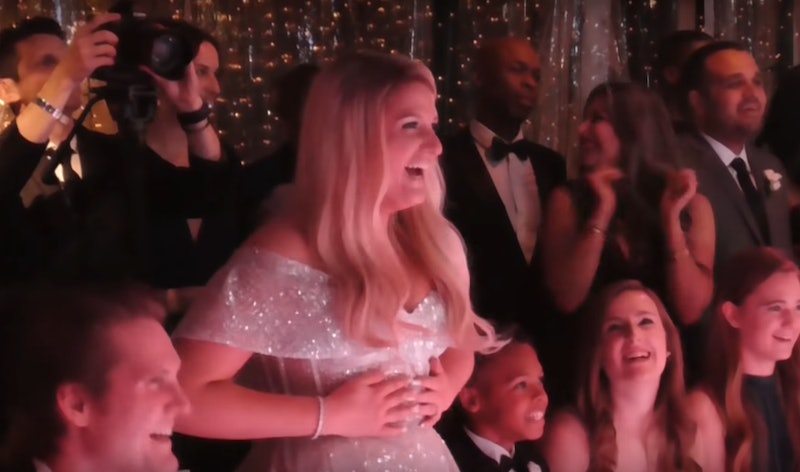 If you've ever wondered what it would be like to attend a celebrity wedding, you're in luck. Meghan Trainor's new "Foolish" video features a ton of footage from her Dec. 22, 2018 wedding to Spy Kids alum Daryl Sabara, and it'll legitimately make you feel like you were there. It also might give you a little bit of FOMO, because it looked like it was a ton of fun.

Just a few days after releasing her second EP — titled The Love Train —  Trainor shared a music video for the single "Foolish." The whole thing is filled with clips from her and Sabara's wedding reception, and was apparently "shot by my wedding guests and edited by my brother Ryan," the singer revealed on Twitter.

Now, seeing as how the footage was lovingly recorded by various people — most of whom probably aren't professional videographers —  it's a little wobbly at times. If you're prone motion sickness, maybe take a Dramamine before you watch? Or, alternatively, just try to focus your attention on how incredibly happy everyone at the reception looked. Seriously — that tent was like, overflowing with joy.

The video begins with Sabara and Trainor entering their reception as husband and wife. Trainor could not have looked more lovely in her off-the-shoulder, bedazzled Berta gown, while Sabara looked equally dashing in his Armani suit.

Regarding choosing her dress, Trainor told People back in January, "I didn’t want to look like a glam pop star — I just looked like a really beautiful woman that I’ve always wanted to look like since I was my uncomfortable 13-year-old self." Mission accomplished.

After the couple was greeted by guests with a ton of applause, the "Foolish" video cuts straight to the dance floor. That's when the real party gets started.

There's footage of Trainor and Sabara's first dance, clips of guests giving speeches, glimpses of decorative accents, the tossing of the bride's bouquet, and a whole lot of boogie-ing down. One of the most memorable parts of the video, though, comes toward the end (around the 2:50 mark, in case you're impatient), when Sabara and four back-up dancers surprised Trainor with an impressively-choreographed dance routine.

According to People, Sabara's performance included a medley of pop songs, including Chet Baker’s "Someone to Watch Over Me," "Pop! Goes My Heart" from Music and Lyrics, and "Suit & Tie" by Justin Timberlake. "I’m always like, 'I’m giving you guys a show all the time; put on a show for me!'" Trainor told the publication of Sabara's secretly planned routine.

"I fell in love all over again," she continued. "I thought I was going to pass out with joy." Totally understandable. It's pretty adorable, and Sabara's got some serious skills. Oh, and if you're interested in watching his full performance, see the video above and/or Sabara's Instagram page.

It's super cool that Trainor and Sabara not only decided to share intimate footage from their wedding reception with all of their fans, but made it into a totally charming music video, too. They seem like a match made in celebrity heaven, so here's to wishing them a happily ever after.