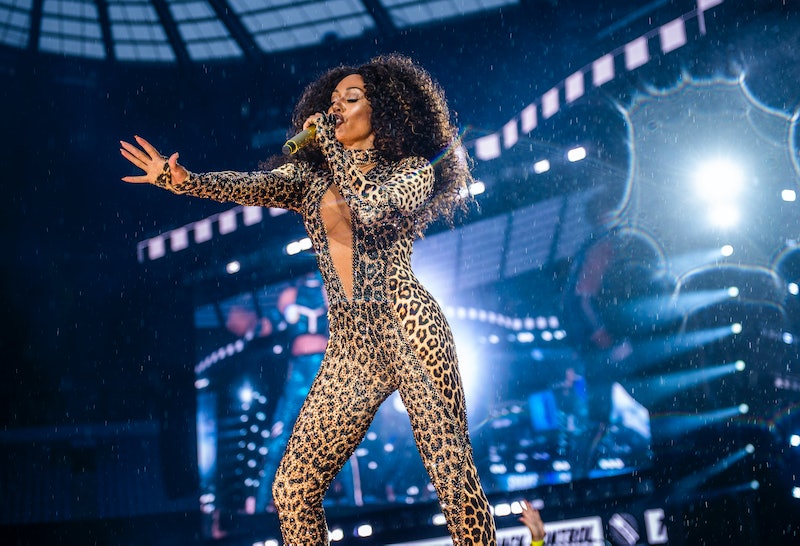 On 15 June we waved goodbye to the Spice Girls comeback tour. It was the first time the purveyors of girl power had taken to the stage together since the 2012 Olympics and of course the delivered us an incredible show. Although some fans said the tour had a number of issues like the fact that founding member Posh Spice was not present, it was the perfect tour to send us into a frenzy of '90s nostalgia. But it seems that we aren't the only ones sad that the tour's over judging by Mel B's Spice Girls tour hairdresser's Instagram post.

The Spice Girls may've hung up their platform heels once again but their mark on the pop world is indelible. Twitter user @oneofthosefaces who goes by "#1 spice girls fan" uploaded onto the site a screen shot of a caption that Mel B's hairdresser Michelle Sultan uploaded onto Instagram. In the photo, Mel B can be seen in full Scary Spice regalia, wearing an animal print one piece, platform heels, with her gorgeous 'fro blowing in the wind. The caption is pretty lengthy and starts with Sultan talking about how amazing the experience of being on tour with the Spice Girls and all their fun times, but then she goes on to talk about Mel B's hair. Sultan's caption reads

"You've inspired a generation of Black and Mixed raced girls to be fearless with their hair way before this 'natural hair movement' you were doing it back in the 90s! I thankyou for trusting me every night with your mane! Although just hair, your hair means so much more! Black and mixed raced girls felt accepted when you came out with your fro! The bigger the afro the more power you have and what a beautiful thing to stand as a black woman watching all those other black woman come to watch the Spice Girls with their afros."

To be honest Sultan is totally right. I know first hand about the narrative surrounding people of colour and hair and how it becomes part of your identity. Within Afro-Caribbean and Hispanic communities the dialogue surrounding afro hair has been divisive. Although we have been encouraged to wear our hair naturally for some time, when afro hair is perceived as unruly it is labelled as "nappy" or "pelo malo," which translates as bad hair. This means many women can often spend huge sums of money in order to conform to European ideals of what beautiful hair is. Whether it be spending money on a weave, perm, relaxer, or Brazilian blow dry, for many, the desire has been to be as far away from the "nappy" label as possible.

Mel B and her hair broke the mould in so many ways. Throughout the '60s and '70s there was a huge boom in black women in the media wearing their hair naturally in America, such as Diana Ross. But like many things, this seemed like a phase. Part of the identity of Scary Spice was her afro, which Mel B wore with pride. While we have a natural hair movement now, which has seen black and brown women wearing their hair naturally, Sultan is so right in saying that back in the '90s, Mel B was one of the few women in the media doing this. Just like the union jack dress was part of Ginger Spice, and the high ponytails were part of Baby Spice, the afro was part of Scary Spice. It didn't define Mel B, but it was part of her identity and through this, she has encouraged other young girls to embrace their identities and wear their natural hair.