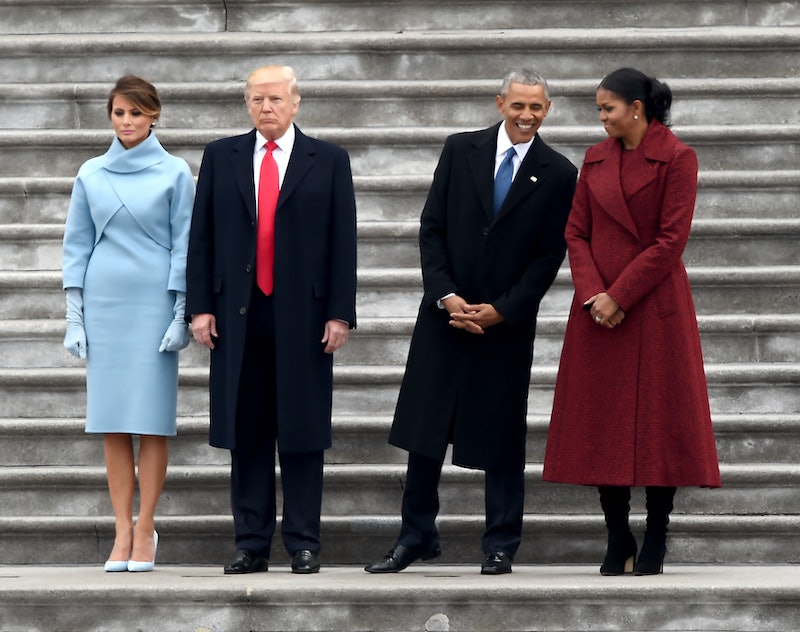 When you're a celebrity couple, no public move goes without scrutiny. And it might explain why people have read so much into the body language of Donald and Melania Trump. Let's face it — when you live in the White House, something as innocuous as a flick of a wrist can go viral for days.

Just think back to May of this year when cameras captured Trump reaching back for Melania's hand as he walked beside Israeli Prime Minister Benjamin Netanyahu and his wife Sara in Israel. Melania, who was spaced a few steps away from him, flicked her wrist and seemed to swat her husband's hand away, causing him to immediately withdraw his arm. The swat went viral and speculators made unconfirmed guesses about what that swat could have meant.

While body language, like the wrist flick, can be revealing, it also has caveats. "Nonverbal communication is a lot about perception," said New York-based Tonya Reiman, a public image consultant for professionals and author on body language. If you want to pick up meaningful body language cues, look for what deviates from normal behavior.

"People who aren't fans of Trump like to see Melania as a captive, a princess in the tower."

Essentially, body language doesn't reveal absolute truths about any person or what they're thinking or feeling. But it can lead to valuable insights. And body language experts certainly have some opinions about what Trump and Melania's interactions say about their own high-profile relationship.

On one side of the marriage is Trump — New York real estate tycoon, braggadocio, and polarizing figure. Trump is known for both his anger and his ease at inciting anger. On the other end, there's Melania Trump, neé Knauss, a Slovenian woman who modeled in Europe before she took her career to the United States and speaks as many as six languages. She presents herself as a quiet first lady — one less involved in politics than her predecessors. Analysts guess the semi-private behavior is Melania's way of protecting her family.

"People who aren't fans of Trump like to see Melania as a captive, a princess in the tower," says Nick Morgan, a public speaking coach and speech writer based in Boston. "People think, 'How could she up with a lout like Trump?'" He cites a 2005 Larry King Live interview, showing Donald and Melania as newlyweds, in which "they seem to genuinely like each other."

"Sorry to people who want to create a prisoner scenario," Morgan says, "but I think she's an independent woman who knew what Trump is like when she married him."

That said, Morgan does not think Melania knew she was marrying into future politics. When Trump became president, the pair's behavior towards each other dramatically shifted.

Fast forward to their 60 Minutes interview, following Trump's victory, and Melania has grown to become much more guarded, Morgan observes. In addition, it seems as though Trump pays little attention to her. If he's deliberately turned toward her, it's almost as if he's only pretending to be interested in what she's saying, Morgan suggests. Admittedly, how people act on-camera is different from how they act off-camera, so maybe Trump listens to her when they're in private. Or maybe not.

Reiman is willing to guess, though, that Trump and Melania do not have a warm relationship on or off-camera compared to their pre-politics era. The Trumps barely touch each other now compared to early videos, and viewers will see a flash of pain on Melania's face when he does something that hurts her, Reiman says.

"He will walk ahead of her, or push ahead to be first. When he sees another couple holding hands, then he'll turn around to self correct," she observes. "There was time during the inauguration where you see Melania smil[e], thinking he's turning to talk to her, and her face falls because he's talking to Ivanka. Within a beat of the second she goes from happy to sad." (Comments on the Trump inauguration photos and videos were far and plenty.)

"There is evidence that they are not happy," says Patti Wood in agreement. Wood is an Atlanta-based body language expert who analyzes celebrities and other public figures. Around the time of the inauguration, before Melania began seemingly rejecting Trump's hand, Wood saw a lot pictures where Trump would lead Melania, pulling her behind him like a child. Or she would make bids to hold his hand and he would turn away in an admonishing way.

"She would respond to this distancing with shoulders and head going down, or a facial response of sadness, or being tense and upset," Wood adds. "Looks like they gave her a talking to because she became less transparent."

It isn't difficult to believe Wood's and Reiman's conclusions, especially when you compare Trump and Melania's body language to that of Barack Obama and Michelle. "Obama would offer helpful gestures, like helping her into places. Putting an arm around her. There were spontaneous little moments of leaning in and touch," Wood muses. "Those tiny moments of affection show real support for one another."

And whereas the Obamas looked into each other's eyes while dancing at events or held hands at White House performances, the public has seen very little similar interactions between Trump and Melania. The Trumps might have a working marriage in private, but the public doesn't get a sense of that, Morgan points out.

"Melania doesn't help Trump's image or presidency because you see the rift between them and we compare it to previous presidents and first ladies," Reiman says. In fact, their perceived lack of closeness has put them under the microscope — and not in a positive way. If the goal was to help Trump's image, Reiman says she would coach Melania to take Trump's lead. "If he reaches for your hand, you take it. If he looks at you and smiles, you do the same. It's not healthy for a relationship, but if the goal is just to help his presidency…"

"If they want to work on their romantic relationship, I would coach them to show their affection when they feel love bubble up," Wood advises. "Show tenderness when you first see them in any situation. That would be my heart message, but it may help their professional branded image."