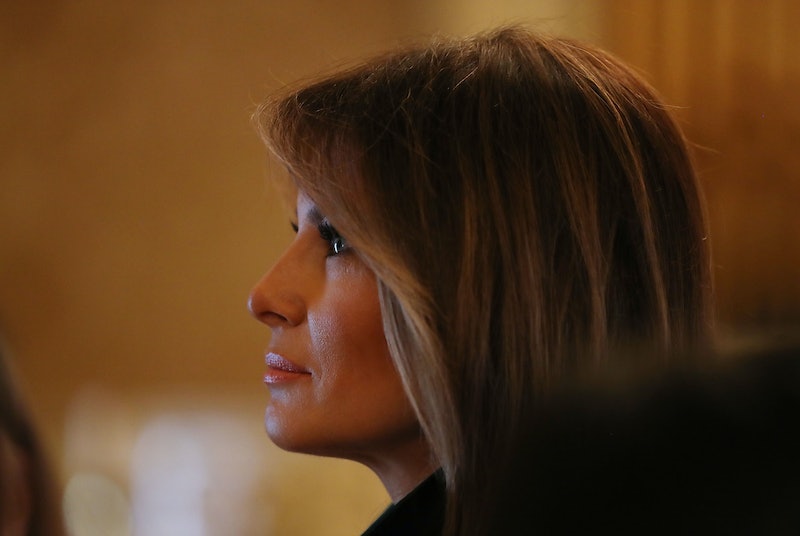 The funeral for former first lady Barbara Bush, who passed away this week at the age of 92, took place on Saturday. It saw some prominent figures turn out to pay their respects, including Bill Clinton and Hillary Clinton, as well as Barack Obama and Michelle Obama. And the current first lady was present as well ― Melania Trump attended Barbara Bush's funeral without Donald, and social media definitely noticed an apparently lighthearted moment she shared with former president Obama.

Bush was married to former president George H.W. Bush in 1945, and the two remained together for more than 70 years. She lived in the White House throughout her husband's presidency, from 1989 to 1993, after which the pair moved to Texas, where they made their home until her death.

Despite the Clintons showing up to the event, as well as Obama, there was a notable absence at the funeral ― namely, President Donald Trump, who instead reportedly spent his Saturday in South Florida at his Mar-a-Lago estate.

For what it's worth, according to USA Today, this is not actually a breach of custom; while first ladies typically attend the funerals of former first ladies, sitting presidents typically do not. Barack, for example, did not attend the funerals of Nancy Reagan or Betty Ford. But he was most definitely in attendance on Saturday, and shared a few words and smiles with the current first lady.

Needless to say, the moment has caught a lot of eyeballs on social media, given just how sharply and negatively the current president has spoken about his predecessor.

It's also been noted by many people that prior to entering the world of elected politics, both Donald and Melania alike stoked the discredited "birther" conspiracy theory about Barack's place of birth, insisting that he was not a natural-born citizen, and was therefore an illegitimate president.

Birtherism is widely viewed as a racist conspiracy theory, and although the current president was perhaps the most famous birther of all time, the first lady echoed his rhetoric on a 2011 episode of The View.

Since her husband's unexpected victory in the 2016 presidential election, however, Melania's public posture toward the Obamas ― at least, as rarely as they've occupied the same spaces ― has generally appeared warm and friendly. On her husband's inauguration day, she gave a gift-wrapped box to Michelle, which the former first lady later revealed contained "a lovely frame."

And now, during what was by all accounts a solemn remembrance of Bush's passing, she appears to have sat comfortably alongside the Obamas, and with some apparent warmth as she exchanged words with the former president.

Donald, for his part, was reportedly golfing on the same day as the funeral services, which were held in the Bush family's hometown of Houston, Texas. Again, it's worth noting that despite the not-great optics of him not attending the funeral, this is far from unprecedented, as Obama similarly sat out the funerals of two former first ladies during his presidency.

It's no surprise that the Obamas and Clintons showed up to the funeral, however. Despite the fact that the Bush family is entrenched in the Republican Party, and some of the policy views of the different families are divergent, they've all reportedly become friends outside of the realm of politics.

By comparison, even though he was once a rival candidate of former Florida governor Jeb Bush, the president has said some very derogatory things about the Bush family in his relatively short time on the political stage, including taunting Jeb for praising his mother during one of the 2016 Republican primary debates. Perhaps recognizing that tension, the White House has claimed that Trump didn't go to the funeral "out of respect for the Bush family."