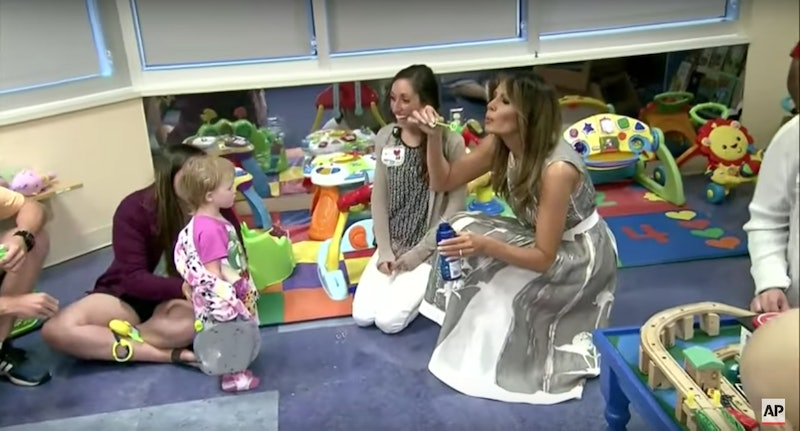 On Tuesday, as part of her wellness initiative as First Lady, Melania Trump brought "Be Best" to Nashville, Tennessee, where she learned about babies who are born with neonatal abstinence syndrome (NAS). NAS can occur when infants are born to mothers with opioid addictions, and then go through withdrawal themselves. Since Trump's "Be Best" campaign focuses on the opioid crisis as one of its main pillars, her visit to Nashville was a concentrated effort to learn more about the crisis in a hands-on way.

According to USA Today, Trump spent the day at Monroe Carell Jr. Children's Hospital at Vanderbilt University, splitting her time between playing with children at the hospital, and attending a roundtable to discuss treatment options for infants born with NAS.

On her Twitter account, Trump said of her visit, "#BeBest will continue to bring attention to NAS. A very big thank you to @VUMCchildren & staff for an informative & moving visit. It is a joy spending time w/ such courageous kids & to witness the strength of families who must deal with these tough situations."

Trump's visit was a part of her ongoing "Be Best" campaign, which has been defined on its official site as focusing on "the major issues of children today, with the goal of encouraging children to BE BEST in their individual paths, while also teaching them the importance of social, emotional, and physical health." The "Be Best" campaign has three central pillars of focus: well-being, social media use, and opioid abuse.

Trump's "Be Best" campaign site cited opioid abuse as one of the main tenets because of the epidemic of "opioid dependence, addiction, and abuse" in the country currently.

Trump's location choice wasn't accidental. Tennessee has been dealing with a growing opioid epidemic in recent years, with the number of babies who were born with NAS increasing tenfold between 1999 and 2010.

This is the second time a White House official has visited the Children's Hospital at Vanderbilt. The first time was in 2014, when Michael Botticelli, the drug policy director for the White House at the time, visited to learn about how to best treat drug-addicted babies, just like Trump.

So far, Trump's "Be Best" campaign has marked sporadic involvement, as Trump's illness (which began a few days after she announced the campaign) delayed her involvement. Trump's spokeswoman, Stephanie Grisham, said to NPR, "[Melania Trump's] health is paramount because she's not gonna be able to do any good unless she's completely healthy. So it definitely slowed things down, but she's perfectly healthy now, so we're back in business."

Trump's Nashville trip is the first campaign event she's done for "Be Best" outside of D.C., but Grisham confirmed that the first lady will continue to travel the country to promote the initiative. More specifically, the first lady's office will "plan events in the coming months related to all three [of her main pillars]."

Grisham continued, "So whenever we get invited to something that is in line with any of those three pillars, we're going to attend when at all possible."

"We've got two to six years left to do this," Grisham added, "and so we're taking our time."

Outside of her "Be Best" campaign, Trump also took time to visit immigration facilities on two separate occasions, to talk to immigration officials, and meet with detained children and families. She also traveled with POTUS on his European trip to visit the UK and Scotland.

In her remarks in March at the rollout of the "Be Best" campaign, Trump emphasized the importance of education and awareness when facing the opioid crisis. "In my role as first lady," she said, "much of my focus has been towards understanding the negative effects the opioid crisis is having on our children and young mothers. Many young mothers are not even aware of this disease, so we must continue educating them about the real dangers of opioids on unborn babies."