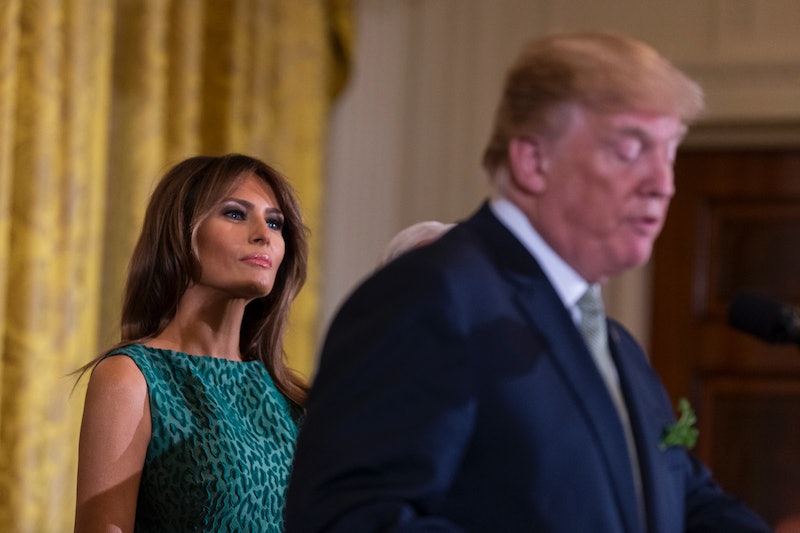 FBI agents conducted a raid on the office, home, and hotel room of President Trump's personal attorney on Monday, alarming political observers and raising questions about the future of the Trump administration. Although it's still unclear precisely what the agency's end goal is, it seems that first lady Melania Trump could help the FBI's Michael Cohen investigation, depending on what course that investigation takes.

The raid on Cohen was carried out by the FBI, but many other authorities had to give it the green light before it could occur. Cohen's lawyer says that the case was originally referred to the Justice Department by special counsel Robert Mueller. The Justice Department then assigned it to the U.S. Attorney's Office for the Southern District of New York, which in turn asked a federal magistrate judge for a search warrant. The magistrate agreed, at which point the attorney's office authorized the FBI to conduct the raid.

It's still unclear what prosecutors' end game is with Cohen. But there's been some reporting as to what the FBI was looking for, and if that reporting is accurate — a big "if" — it's entirely possible that Melania could play a key role in a hypothetical case against Cohen.

According to reports, the FBI sought documents regarding, among other things, a $130,000 payment that Cohen made to adult film actress Stormy Daniels in the last days of the 2016 campaign. Daniels claims that she had sex with Trump in 2006, and that when she made moves to discuss it with the media in the weeks before the election, Cohen paid her for her silence. Cohen acknowledges that he made the payment, but claims that it was his own money and won't say what it was for. The White House says that Trump denies the alleged affair with Daniels, though the president himself hasn't publicly addressed it.

The Times reported Wednesday that prosecutors are investigating whether this payment to Daniels constituted an illegal contribution to Trump's election campaign. But Cohen has told the media that the payment was not "a thing about the campaign," and that rather, he made it with Trump "and the family" in mind.

This hints that Cohen may try and argue that he paid for Daniels' silence not in an attempt to help Trump's campaign, but simply to prevent Melania from finding out about the alleged affair. But Paul S. Ryan, a litigator at the watchdog group Common Cause, says that this will be very hard for Cohen to argue, thanks to the timing and nature of the payment.

"[The payment] happened more than a decade after the affair took place," Ryan told Business Insider. "Further investigation may...undercut any argument by Michael Cohen that this payment wasn't about keeping the information from voters but to keep the information from Melania. We'll see about that. It seems unlikely given the decade lapse in time."

In January, Common Cause filed a complaint with the Federal Election Commission and Department of Justice over the Daniels payment.

Ryan drew a comparison to the trial of former Sen. John Edwards, who was charged with accepting illegal campaign contributions after his supporters allegedly paid his mistress Rielle Hunter for her silence ahead of the 2008 presidential election. During his trial, Edwards' attorneys argued that the payments were made not with an eye toward politics, but merely to shield Edwards' ill wife from the embarrassment of having the affair publicly reported. Edwards ultimately wasn't convicted.

But that defense might not work for Cohen, Ryan said.

"Edwards's lawyers made a big deal at the trial about the fact that the DOJ had zero evidence that Hunter was talking to the press about going public with her story or even contemplating it," Ryan told Business Insider. "By contrast, we know, as a factual matter, that Stormy Daniels made it clear she was talking to multiple national media outlets in October of 2016 and contemplating going public with her story. And that's what got Donald Trump's attention."

It's worth stressing that all of this is highly speculative. It remains unclear what the FBI was looking for in the Cohen raid, whether it's seeking to press charges against him, what those hypothetical charges might be or how Cohen would respond to them. And yet it's entirely possibly that, as unlikely as it may seem, Melania could play a key role in how all of this plays out going forward.