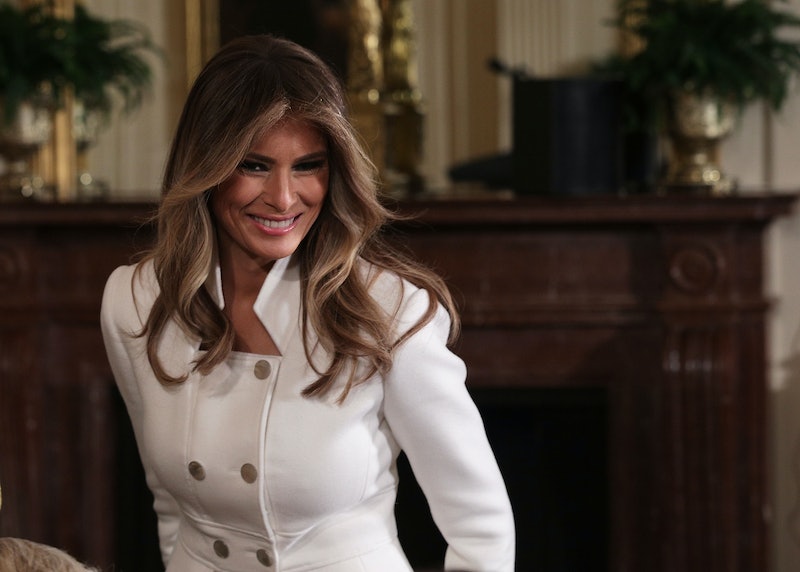 Unlike her prolific husband, Melania Trump does not appear to be an enthusiastic tweeter. Since the inauguration, her official FLOTUS account has produced all of seven tweets. But the main reason Melania's message has received so much attention is the story that prompted it — a "private" conversation between a model and a journalist.

Model and actress Emily Ratajkowski attended a party on Sunday night, where she at one point ended up seated next to a New York Times reporter. During a conversation, the reporter called Melania Trump a "hooker," according to Ratajkowski. Ratajkowski was having none of it and she took to Twitter to denounce the comment that she perceived as a major act of slut-shaming.

According to her social media presence, Ratajkowski is no President Trump fan. Much of her Twitter feed is filled with messages that counter or protest his agenda. But as she points out in her very first tweet, regardless of a person's political views, they shouldn't be subjected to sexually demeaning comments or slut-shaming.

Melania Trump appreciated that message. In her response, not only did she give "applause" to women who supported other women, she also tagged @emrata.

And while the reporter in question works for the New York Times, a left-leaning publication, Melania Trump has been the subject of right-wing criticism as well. During the Republican primary, a pro-Ted Cruz Super PAC ran an ad in Utah featuring a semi-nude Melania Trump photo. The apparent goal was to "scare" conservative Mormons into choosing Cruz over Trump because.... she was a model.... she wasn't modest enough? There's a lot of sexist ideology packed in just that one ad.

Criticism of Melania Trump is not off-limits, of course. She's an adult who is married to and has campaigned for Donald Trump, and as first lady, her words and actions now reflect upon Americans — it's the nature of political life. We're not shy here about holding leaders to account for their behavior.

But slut-shaming her most certainly does not fall under holding her accountable.