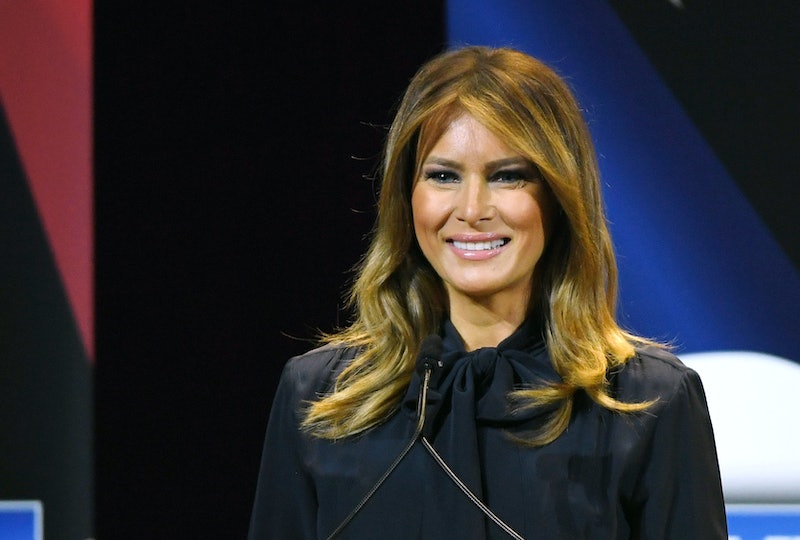 At a town hall in Las Vegas on Tuesday, the first lady addressed the severity of the nation's opioid crisis, as one of the pillars of her Be Best initiative. But she also offered the audience a lesser-seen, lighter side of herself, as well. To former Fox News commentator Eric Bolling, Melania Trump shared her family's favorite meal, her daily schedule, and more, in a surprisingly candid public interview.

At one point, as can be seen in the video below, Bolling asked the first lady, "What would you cook for you and the president ... if you [had] any type of food?"

Trump answered, "I didn't do that yet, honestly." After a pause of laughter, Trump added, "There are always little snacks that I could prepare for our son, and when [the president] comes home late, but ... no, it's really no time."

FLOTUS went on to compliment the White House cooking staff, saying, "They're doing such a fantastic job," adding, "They're real professionals, so I want to keep them."

Amid more laughter, Trump was asked what the family's choice would be if they could only choose one meal. After a long pause, in which at least one person yelled out to suggest McDonald's, she said, "Maybe spaghetti."

At another point in the interview, Trump got personal about her daily schedule, explaining to Bolling just how busy her day-to-day life is.

My days are very busy. I wake up very early, I make sure my son goes off to school, and then I start working. I'm having a team in my east office...we're working very hard, very closely, [I'm] very detail oriented. And then I have 100 people working over in the residence, and [I'm] also working very closely with the White House Historical Association, making sure the White House is in beautiful, perfect shape.

The interview on Tuesday offered a refreshingly personal side of the first lady, though that wasn't the reason why she held the town hall. Trump's main goal in holding the Las Vegas event was to talk about the opioid crisis, which she did.

The magazine further revealed that Bolling, too, had a personal reason for being part of the event: He has been hosting opioid crisis town hall events around the country ever since his son died in 2017 from a fentanyl-related overdose.

Trump also took the opportunity on Tuesday to remind the media what she believed they should be focusing on. FLOTUS suggested that media publications should “devote as much time to the lives lost [by the opioid crisis], and the potential lives that could be saved, by dedicating the same amount of coverage that you do to idle gossip or trivial stories,” Time reported.

Trump's town hall signified the end of her three-state Be Best tour, though it's likely she'll do future events for the initiative.

Correction: A previous version of this story mischaracterized Eric Bolling's employment. It has been updated.