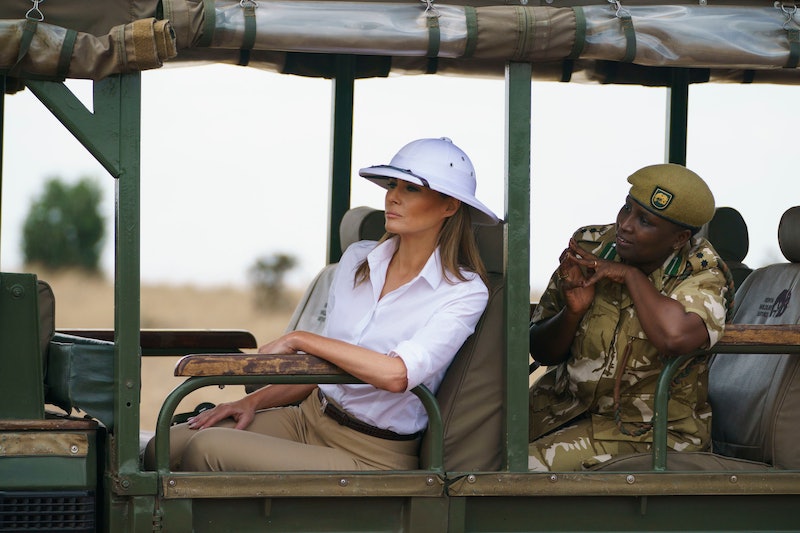 The first lady's first solo trip to Africa has not been without controversy. In the second biggest fashion faux pas of her public life — the first being the "I really don't care. Do u?" Zara jacket — Melania Trump offended Kenyans with a white, colonial hat. Now Trump has responded asking that the press pay more attention to what she does and not what she wears.

Trump is on a four-country tour of Africa, and in Kenya, while on safari, she donned a style of hat called a pith helmet that was first worn by white colonists in the country. Experts called the choice "tired" at best on Twitter, and at worst, implied it was culturally insensitive.

Trump would have none of the criticism. "You know what, we just completed an amazing trip, we went to Ghana, we went to Malawi, we went to Kenya, here we are in Egypt," Trump said in response to reporters' questions about the hat. "I want to talk about my trip and not what I wear. ... That’s very important, what I do, what we’re doing with USAID and what I do with my initiatives. ... I wish people would focus on what I do, not what I wear."

Some of the critiques, though, were stinging. "It’s like showing up to a meeting of African-American cotton farmers in a Confederate uniform,” Matthew Carotenuto, African Studies coordinator at St. Lawrence University tweeted. "Historical context matters."

The history of the hats, shared on Twitter by Elliot Ross, a doctoral candidate in English and comparative literature at Columbia University, further explains why some found them offensive in the Kenyan context of colonialism. He further developed his argument in an op-ed for Al Jazeera.

"White Europeans have long obsessed over the supposed relationship between race, culture & climate," Ross wrote on Twitter. He went on to explain that colonists in the 19th century thought "'tropical' solar radiation attacked white people’s nervous systems & rendered them infertile."

He points out that this was combined with the belief that whites shouldn't work outdoors, therefore relying on African labor. He adds that idea that the hat is a symbol of "'frontier' spirit of adventure and exploration" is also wrong given that it is more about white fragility. "The pith helmet was part of a pseudo-scientific discourse that enforced class as well as racial domination," Ross wrote.

Kim Yi Dionne, an assistant professor of political science at University of California, Riverside, was also highly critical online. "Melania Trump wearing a pith helmet on her trip to 'Africa' is more than a silly sartorial choice," Dionne wrote. "It's a reflection of her outdated understanding of Africa."

Trump wore that hat on Friday during her visit to Nairobi. She started the day feeding baby elephants and then moved on to the safari portion of the tour of Nairobi National Park, a wildlife reserve that borders Kenya's capital. During the safari is when she wore the hat.

Trump responded to questions about the hat in Egypt, where she visited the pyramids. In addition to these more touristy highlights of her itinerary, which also included Ghana and Malawi, Trump has visited hospitals and schools and brought attention to U.S. foreign aid in the region — spending that her husband has suggested be cut.