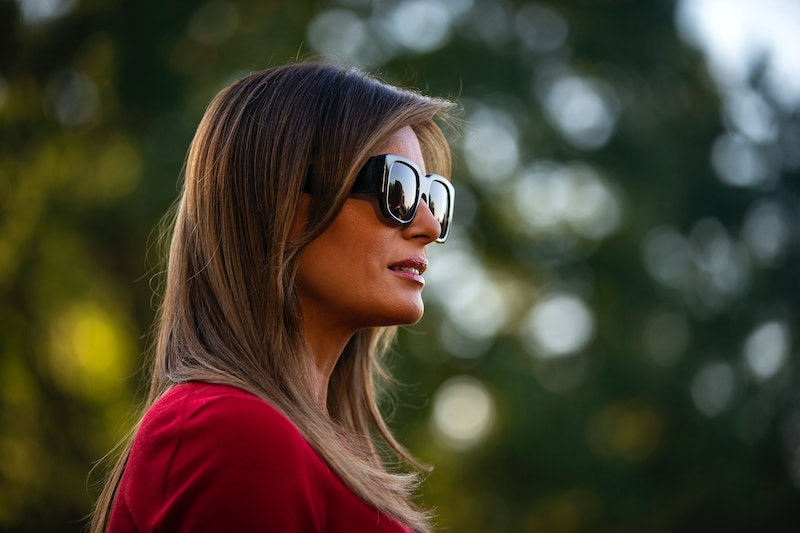 As President Donald Trump used his Twitter account to attack the media on Thursday, labelling them "the real enemy of the people," First Lady Melania Trump sat down with teens to discuss responsible digital behavior. The first lady made an unannounced visit to Microsoft's Innovation and Policy Center in Washington D.C. on Thursday as part of her Be Best campaign. There, Melania listened to students' tips for being civil online.

According to the White House, Melania participated in a listening session with Microsoft's Council for Digital Good, a council comprised of 15 teenage students tasked with providing ideas and feedback on the technology company's work regarding youth-focused online safety policies. Students on the council shared their "15 tenets of responsible digital behavior" with the first lady as well as art projects representing their individual expressions of digital civility.

The first lady applauded both the students' art projects and their overall efforts to promote and encourage responsible digital behavior. "To see students taking action and being positive leaders in the digital world for youth is exactly what Be Best is focused on," Melania said in a statement released by the White House after her visit.

"Peer-to-peer leadership can be one of the strongest influences on our children," she said. "Using their artistic talents, these students provide unique perspectives on how youth should conduct themselves responsibly online."

Melania launched Be Best, a youth-focused campaign that, among other things, aims to help children "learn positive online behaviors" earlier this year. Specifically, the White House has noted that the first lady believes it is adults' responsibility "to educate and reinforce" to children that "they must choose their words wisely and speak with respect and compassion" whether they're speaking verbally or online.

Earlier in the year, Melania also met with executives from a number of online and social media companies, including Amazon, Facebook, Google, and Twitter to discuss cyberbullying and internet safety. During the 2016 election, Melania vowed to fight cyberbullying should her husband, who has regularly been accused of the behavior, be elected.

"Our culture has gotten too mean and too rough, especially to children and teenagers," she said while speaking at a Trump rally in Pennsylvania in November 2016. "We have to find a better way to talk to each other, to disagree with each other, to respect each other. We must find better ways to honor and support the basic goodness of our children, especially in social media. It will be one of the main focuses of my work if I'm privileged enough to become your first lady."

The following year, Melania admitted on CBS' 60 Minutes that while her husband's penchant for launching social media attacks could land him in trouble on occasion, she thought they "helped a lot, as well." She went on to say that although she's vocal about her opinion of his social media use, Trump "will do what he wants to do [in] the end."

The White House did not reveal Thursday if or how Melania might plan to put what she learned from Microsoft's youth-driven Council for Digital Good to use as part of her Be Best campaign.