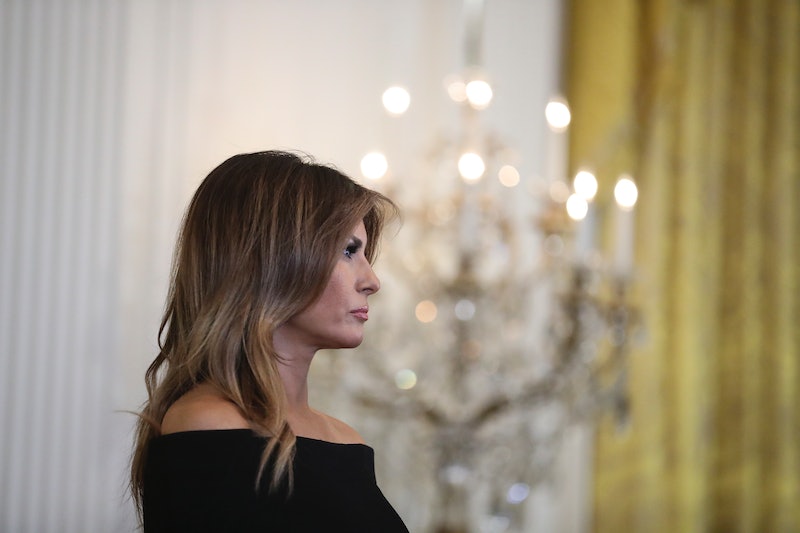 For her husband's second annual address before Congress, Melania Trump's outfit at the SOTU was an all-black outfit with gold buttons. It was a stark contrast to the wave of white that reflected female lawmakers at the annual address, who wore the color in a concentrated effort to acknowledge the suffragette movement. Melania's spokesperson has not yet commented on the inspiration behind her evening wear.

On Tuesday evening, a majority of the 66 Democratic female representatives and delegates wore white to the SOTU, at the suggestion of the House Democratic Women's Working Group. The chair of that group, Rep. Lois Frankel, explained the decision in a statement acquired by CNN. Frankel said:

We wear white to unite against any attempts by the Trump administration to roll back the incredible progress women have made in the last century, and we will continue to support the advancement of all women.

Nancy Pelosi then tweeted a picture of many of the female lawmakers, writing a more blunt caption to explain the all-white look: "Tonight, our Democratic #WomenWearWhite in support of women's rights -- in spite of a @POTUS who doesn't!"

Melania also wore black during Trump's 2017 Joint Address to Congress, but last year she did wear white. However, like this year, her outfits for the previous two speeches were also in opposition to what many female lawmakers were wearing in solidarity with each other.

Of course, the first lady is bound to get attention no matter what she wears — but Melania's 2018 outfit drew notice for a few particular reasons.

According to Vanity Fair, the reason why people cared about Melania wearing a white pantsuit in 2018 had to do with three main factors. First, white was known to be the color of the suffragette movement. Secondly, the white pantsuit was also a famously common outfit for Hillary Clinton during her 2016 presidential campaign. And lastly, for that SOTU, a majority of congressional women wore head-to-toe black outfits as a nod to the Times Up and #MeToo movements, per InStyle, which (again) drew a stark contrast to Melania.

As InStyle noted, the Democratic Women's Working Group first suggested wearing all-white outfits for the president's first speech to a joint session of Congress in 2017. Like this year, Melania opted to wear the opposite color: black, donning a dark beaded wool dinner jacket and skirt, per The New York Times.

It might seem trivial or dated to talk about a woman's outfit for an event. But as InStyle notes, the first lady lets her fashion choices do the talking more often than not. She rarely gives public statements, especially not on events like the SOTU. Plus, she confirmed on one occasion that her outfits are intentional, when she said that one of her most controversial outfits (a jacket that read "I Really Don't Care, Do U?" on the back) was an intentional nod "to the left-wing media who are criticizing me," per an ABC News interview.

To the Associated Press earlier in the year, Melania's spokeswoman, Stephanie Grisham, gave a blanket statement on FLOTUS' fashion decisions.

Grisham said, "[Melania] does not concern herself with what others think about her fashion and always stays true to herself. Mrs. Trump wears what she likes, and what is appropriate for the occasion."