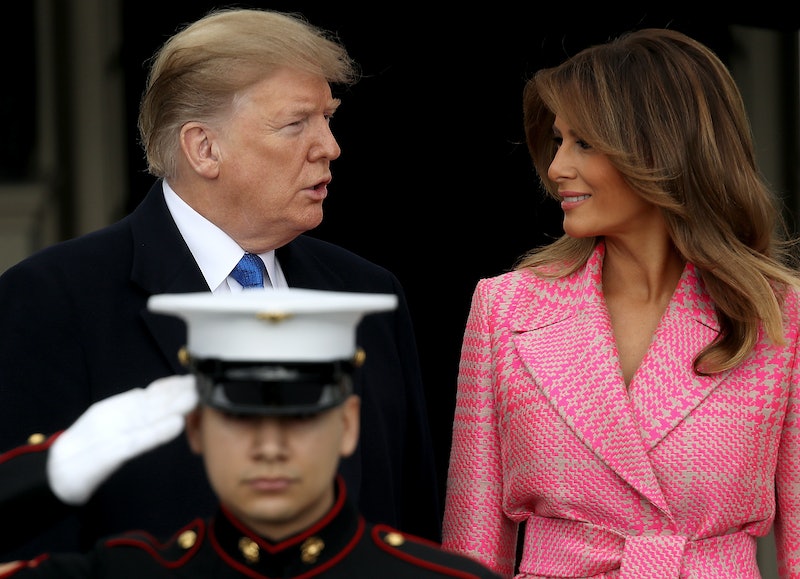 Feb. 14 might be a beloved holiday for some and a headache for others, but for FLOTUS, it's still a day on the job. Melania Trump's 2019 Valentine's Day tweet showed that her plans included a visit to the Children's Inn at the National Institute of Health on Thursday. Via ABC, Melania visited pediatric patients on the NIH campus outside of Washington, D.C., to make a series of creative, themed projects with the kids throughout the day. The network reports that Melania even got a special gift from one of the children.

Per ABC, Trump received a silver necklace from a 13-year-old Kenyan boy named Amani, who is currently preparing to have a bone marrow transplant. The necklace reportedly has "hope & faith" inscribed on a circle. Amani also gave Trump a bouquet of white roses.

Loved sharing an afternoon with such sweet valentines! Your bravery, strength, and love is amazing. Thank you to the @TheChildrensInn and @NIH for the lifesaving work you are doing! #HappyValentinesDay

FLOTUS shared the same photo and caption to Instagram, as well.

According to The Washington Post, this marks the second year in a row that Trump has spent her Valentine's Day visiting the patients at the Children's Inn. As can be seen in the video above, she spent the day crafting cards, making snow globes, and designing candygrams with the children. At one point, she said to a young girl, “I remember you from last year. How are you feeling?”

Per the publication, Trump also showed some love for her current home, writing on a big pink heart, "My favorite city is Washington."

Trump's Valentine's Day outing wasn't the only big event in her week. According to a White House press release, the FLOTUS spent Feb. 13 with President Ivan Duque Marquez and First Lady Maria Juliana Ruiz Sandoval of Colombia. The press release reports that over lunch, the first ladies talked about Trump's "Be Best" initiative, and the opioid crisis in particular.

Trump said (via the press release):

Last week I met with experts at the Office of National Drug Control Policy to learn more about the harmful effects of substance abuse and the steps we are taking to address this problem. We must continue raising awareness so parents and communities can understand fully the harm that opioids are having on our children. My conversation with the First Lady of Colombia today further encouraged a global mission to fighting the addiction crisis and issues facing children domestically and all around the world.

As for POTUS, he did not acknowledge Valentine's Day directly, but he did recognize the one year anniversary of the Parkland school shooting on Twitter, as well as his intentions to declare a national emergency in the coming days.