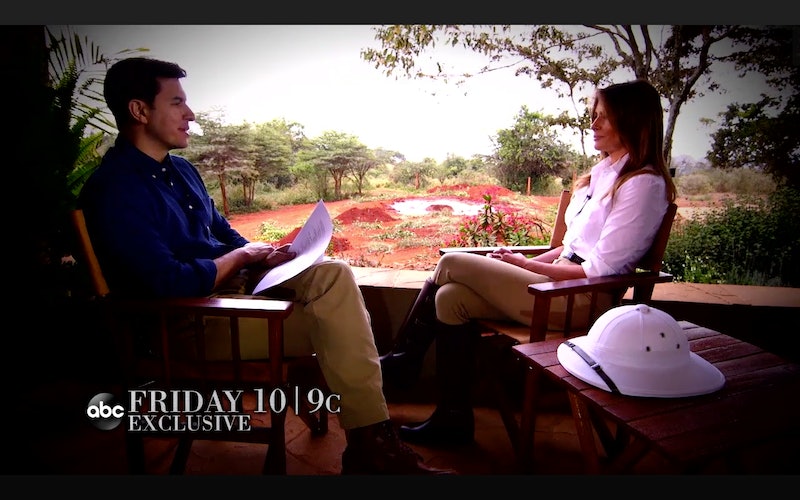 Almost two years into her tenure at the White House, the first lady is much more often seen than heard. She has rarely opened up about her life to media, but that's about to change in the coming days. A trailer for her upcoming special revealed a handful of Melania Trump's ABC interview questions, and they certainly run the gamut. World News Tonight's Tom Llamas asks the first lady about the #MeToo movement, her controversial "I don't care" jacket, and even what she thinks about her husband's rumored infidelity.

Melania's interview with Llamas, a weekend anchor and chief national affairs correspondent with World News Tonight, is scheduled to air this coming Friday. In the tease for the ABC News exclusive, titled "Being Melania: The First Lady," Llamas credits Melania for agreeing to do the interview without any pre-conditions. In other words, no question is off the table.

The montage features Llamas asking a series of questions:

"Can women in the #MeToo movement call you a supporter?" ...

"You're not the first first lady to have to deal with her husband's alleged infidelities. Has this put a strain on your marriage?" ...

"What's the biggest misconception about you?" ...

Viewers don't hear get to hear Melania speak in the promo for the interview (with the exception of an acknowledgement of the notorious jacket), but this sit-down will likely provide the most intimate public conversation yet with the fiercely private first lady. Her interview with ABC News took place during her solo trip to Africa, a journey that allowed her to shine a light on her "Be Best" initiative, a program that focuses on the well-being of children.

Melania visited with the heads of state in four countries — Kenya, Malawi, Ghana and Egypt. During her five-day trip, she visited hospitals and played with baby elephants to supposedly help soften Trump's image abroad, the New York Times reported. Reporters caught up with her toward the end of the trip, when she answered a couple questions about the judicial turmoil happening at home, but she was also careful to avoid one.

"Did you believe Christine Ford?" a reported asked.

"I will move on that," Melania said in response. "And I think we need to help all the victims no matter what kind of abuse they had but I'm against any kind of abuse or violence."

The first lady also revealed a bit about the dynamic between the president and herself.

"I don't always agree what he tweets and I tell him that," Melania said of her husband. "I give my honest opinion and honest advice and sometimes he listens and sometimes he doesn't, but I have my own voice and my opinions and it's very important for me that I express what I feel."

Melania's trip ended on a sartorial snafu, to her repeated frustration, and it could very well be a topic that the first lady decides to tackle in her ABC interview. The exclusive airs at 10 p.m. EST on Friday.