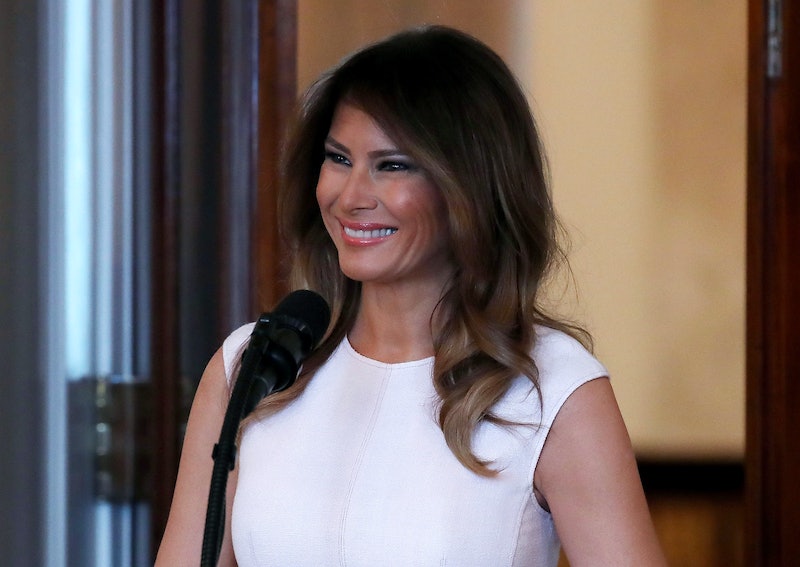 Next week, the first lady plans to meet with high-profile tech companies to discuss how they can help foster safer, more positive online experiences, particularly for young people. But, there's something strange about the way the meeting has been framed. While she plans to meet with companies like Facebook, Twitter, and Snap (the company that owns, among other apps, Snapchat and Bitmoji), Melania Trump reportedly wants to avoid the word "cyberbullying" in her initiative, and doesn't plan to unveil any actual policy initiatives, according to a report by The Washington Post.

That Trump would choose to combat the negativity that can seem part and parcel to the internet itself is not new. Even before becoming first lady, Trump announced her plans to tackle bullying on social media, particularly among young kids. "We must find better ways to honor and support the basic goodness of our children, especially in social media," Trump said in the fall of 2016 while campaigning for her husband. "It will be one of the main focuses of my work if I’m privileged enough to become your first lady. I will also work hard to improve everyday life for women."

For many, the decision to advocate for a less hostile internet induced head scratching, as her husband was long-known to engage in spats on Twitter, a habit he would voraciously continue once he was elected. But still, the first lady has not relented on her promises, even if she has made little progress on that front since moving into the White House.

When it comes to tackling bad behavior online, the issues are complicated, and like many recent political debates, it has a lot to do with navigating the lines between free speech, hate speech, and harassment. According to a Washington Post report detailing the scheduled meeting, Trump's team has avoided using the term "cyberbulling," instead touting plans to make online kindness her focal point during discussions, not actionable goals.

Notably, several of the tech companies she plans to meet with have faced criticism from their users for similar approaches to pervasive issues like online harassment and cyberbullying, as well as the spread of fake news. Twitter and Facebook, in particular, have been heavily chided for posturing as though they intend to take concrete action to protect users, while often opting for more murkily defined approaches.

But it's not just the users who have chastised the companies. A January report by The Wall Street Journal indicates that even some investors have demanded that the social media giants step up their game when it comes to combatting harassment.

The tech giants have made some moves toward bolstering the ways that they protect their users from harassment or, in some cases, fake news. This is especially true after congressional inquiries into Russia-backed bots and the prevalence of viral false information during the 2016 presidential election.

In February, for example, Twitter reportedly began cracking down on one form of online misbehavior — cursing, particularly at a certain type of account. The Post reports that some users were sentenced to 12-hour usage timeouts after cursing at high profile users, such as, in one incident, at Vice President Mike Pence. However, initial reports indicated that users were only being put in timeout for tweeting obscenities at verified users, which is only a small fraction of the Twitter population.

Facebook, too, has made some changes. In December, the site reportedly enhanced its methods of protecting its users from people that they have blocked, making it more difficult for a blocked user to simply create another account. Similarly, message senders are reportedly no longer notified that their message has been read if the recipient opts to filter the message in question. Though these tools will likely help multitudes, two nuanced approaches don't solve the harassment issue as a whole.

As first lady, Trump has the opportunity to heavily magnify, perhaps even centralize the issue. But without clearly defined goals and choosing not to characterize cyberbullying as it is, change can be hard to come by.