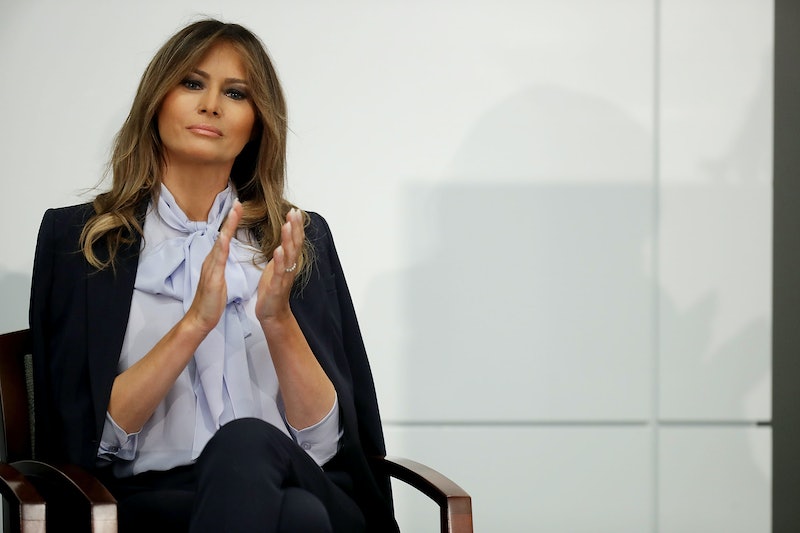 It looks like the first lady of the United States may embark on a solo journey this fall. According to the first lady's spokeswoman who spoke with The Hill on Monday, Melania Trump will visit Africa on a solo trip this coming autumn. Melania is reportedly expected to visit several countries in the continent without President Donald Trump. Bustle has reached out to Melania's spokeswoman Stephanie Grisham for comment.

The first lady's reported plan to sojourn through Africa was first published by the Associated Press. For now, it is not known what the exact date for the trip will be or which countries the first lady will visit. But The Hill reported that the visit will take place in October.

The AP reported that the first lady said in a statement:

This will be my first time traveling to Africa and I am excited to educate myself on the issues facing children throughout the continent, while also learning about its rich culture and history. We are a global society and I believe it is through open dialogue and the exchanging of ideas that we have a real opportunity to learn from one another.

In comments to the AP, Grisham said that the first lady chose Africa as her destination because of the ongoing development projects taking place in various parts of the continent.

This won’t be the first time for Melania Trump to travel on her own. The first lady’s first solo trip actually took place in 2017 when she went to Toronto, Canada, by herself. At the time, Trump attended the Invictus Games. Apart from these two instances, she has traveled the world as the American first lady alongside her husband, Donald Trump. Countries that she has visited in the presence of her husband include Israel, Saudi Arabia, France, South Korea, Poland, Japan, Turkey, Italy, Belgium, and England. Given health conditions, she was unable to go to Singapore with her husband in June.

For some, Melania Trump’s trip to several reported African countries may bring up another memory. In January, sources close to the situation in the White House told CNN that the president spoke of several African countries, Haiti, and El Salvador by reportedly saying, “Why are we having all these people from sh*thole countries come here?” Later on, when Nigerian President Muhammadu Buhari visited Washington, D.C., Donald Trump denied having said that particular word for the countries.

When the press asked Buhari if he had any comments on the allegations, the Nigerian president said, “I’m very careful with what the press says about others and myself. I'm not sure about the validity or whether that allegation was true or not.”

It's unclear what will be on Melania Trump's agenda once she lands in Africa but based on her activity in the United States, the first lady may focus on social initiatives to supposedly improve local conditions. According to AP, Trump's spokeswoman said that the first lady would highlight "successful humanitarian work and development programs" taking place in Africa. Grisham did not specify the names or missions of such projects.