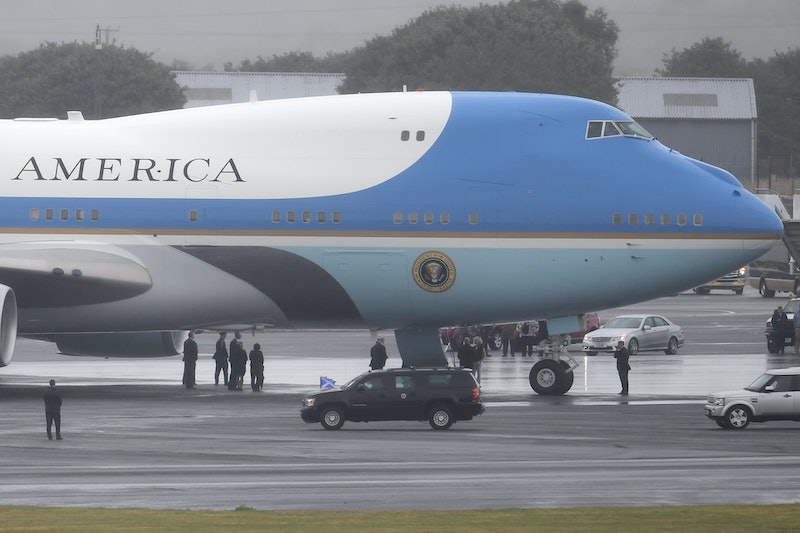 The first lady was traveling to Philadelphia to visit a hospital on Wednesday, when "a minor mechanical issue" forced her Boeing jet to turn around and head back to Andrews Air Force Base. Melania Trump's plane then made an emergency landing but no one was hurt. Journalists on board reported smoke and a burning smell shortly after takeoff.

One of the reporters who was on the plane with the first lady, tweeted out a photo of the Trump exiting the aircraft. Meghan Welsh, a Fox News producer, wrote that she was fine. "We are safely on the ground at Andrews Air Force Base after thin haze of smoke and strong burning smell in the cabin of Air Force One this morning shortly after takeoff," Welsh posted. Others posted photos of the other passengers, including journalists calmly exiting.

A pool report shared by Fin Gomez of CBS News, attributed to Welsh, reads that Secret Service agents hurried to the front of the plane about 10 minutes after takeoff, and a "thin haze of smoke" appeared. The report reads that wet towels were passed out and that shortly after the smell disappated. It may have been an overheated "comms unit," the report continues. The plane was on the ground by 9:05 a.m.

Trump's spokesperson, Stephanie Grisham, said that "everything is fine" and that Trump would still travel to Pennsylvania, albeit on a different plane. Photos on Twitter confirm that plan and show the first lady arriving safely in Philadelphia, attending her event at Thomas Jefferson University Hospital, and then posing with local police before heading back to D.C.

A Boeing C-32A is the designation the Air Force gives the retrofitted 757 that Trump was flying on. That type is not usually used as Air Force One but rather regularly flies the vice president, cabinet secretaries, or the first lady when she's traveling alone, according to the Air Force. A plane is only designated Air Force One when the president is on board.

The larger VC-25s, based on a Boeing 747 design, are what the president typically flies in. An order for new models of that plane was renegotiated by the president after he took office, and he asked that the time line be moved up so that they would come into service during his potential second term. The C-32A, which the first lady was flying on Wednesday, is also set for upgrades — but for the time being, only on the plane's interior.

The first lady's trip was part of her Be Best Campaign. She, along with Health and Human Services Secretary Alex Azar, who was also on the plane, met with families affected by neonatal abstinence syndrome at the Philadelphia hospital. "There are few things harder than seeing a newborn suffering," Trump reportedly told the families, adding that she'd like to "shine a light" on the problem, CBS News' Mark Knoller reported.

The president commented on the incident while speaking with Fox Business. "They're fine, I just spoke to her. They came back; she got in another plane. I said, 'I hope this plane's better than the first one,'" the president told the network. "But, yeah, they had a problem."

The trip from D.C. to Philadelphia takes just about an hour on commercial flights — with only 30 some minutes spent in the air.