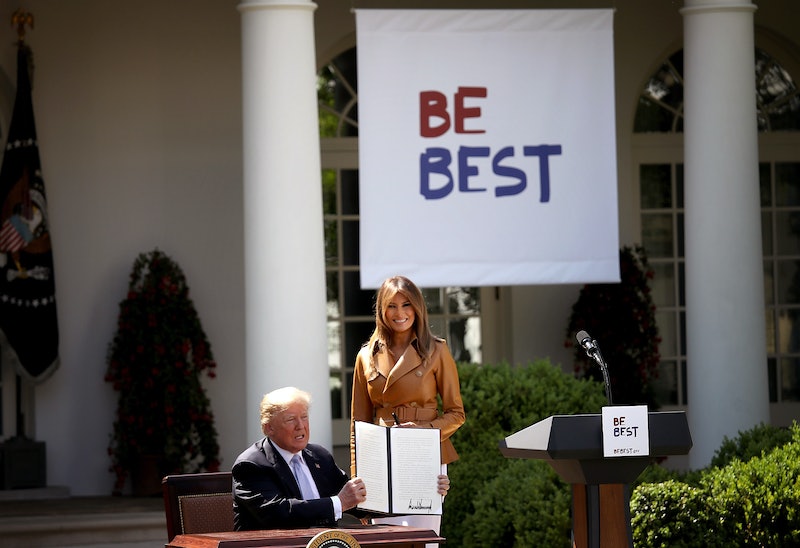 After a Monday press conference, the internet was set aflame for the second time when onlookers realized the similarities between Melania Trump's signature and that of her husband, Donald Trump. The realization was set off after the president held up his signature on a proclamation, and the first lady's was released on an official pamphlet.

The pamphlet was released as a part of Melania Trump's Be Best campaign that was announced Monday. In fact, she signed the opening letter of the pamphlet. President Donald Trump's signature, on the other hand, has been seen a little more often. For example, it appears without fail in every Oval Office ceremony with each new bill signing. This isn't the first timed people have noticed the similarities though.

While both are similar to a V-tach line on a hospital heart monitor, the president's has more of a flourish than his wife's. On May 3, 2017, model Pamela Anderson shared a thank you note from the first lady, which gave experts more material to work with and analyze.

Donald Trump's signature takes between six and seven seconds to sign with more than 30 strokes to the dozen letters in his name, according to news site Quartz. After Anderson shared this note, Yahoo Celebrity reached out to handwriting analyst Sheila Kurt, who has been studying Donald Trump's signature for years. She described the similarity as "amazing."

“Hers looks just like his, which is absolutely amazing,” Kurtz said in an interview with Yahoo Celebrity.

“This is stylized,” the expert told Yahoo Celebrity. “Maybe they brought someone in to show her how to do it or [it’s] a stamp, but it is definitely stylized.”

When asked to further explain Melania Trump's signature, Kurtz told the site that the sharp lines show the first lady to be “a sharp thinker, a fast thinker, and picks up information quickly.”

“The first [letter], where it goes up into a point, that’s pretty sharp and direct and gets right to it. The downstrokes — those two lines in her last name — those are very sharp," Kurtz said.

Another handwriting expert, this one talking to Quartz, said the signature is a reflection of yourself in the world, so you can see why it's so important.

Regardless of whether someone helped Melania Trump stylize the signature, internet sleuths couldn't stop looking into the similarities. A different handwriting expert told Us Weekly that Trump's type of lines within the signature revealed an analytical mind. "The razor sharp writing, full of points and wedges, reveals someone whose mind is extremely analytical," Kathi McKnight told the magazine.

The lack of space between Trump's first and last name is also a clue. The lack of space shows “what ‘Trump’ represents is equally important to him as his personal self," McKnight told the magazine.

More like this
Christina Aguilera Took A Powerful Stand At Brighton Pride
By Sam Ramsden
Are John Legend & Kanye West Still Friends? The Singer’s Latest Update Is Candid
By Brad Witter
'Scream’s Courteney Cox Has Broken A Major Horror Record
By Sophie McEvoy
Which Cast Member of 'Westworld' Season 4 Has the Highest Net Worth?
By Meg Walters
Get Even More From Bustle — Sign Up For The Newsletter