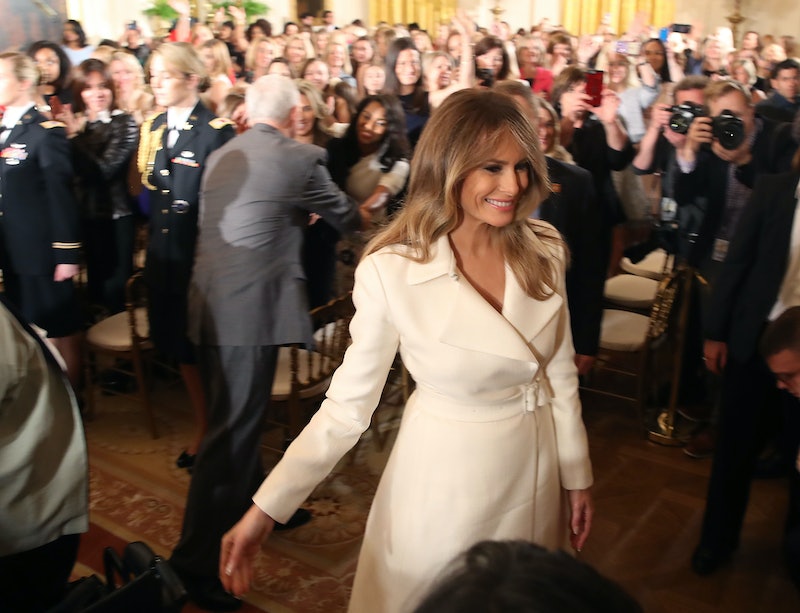 On April 3, the White House released Melania Trump's official First Lady portrait. And as soon as it appeared online,people all over the world took to social media to express their feelings about it. And judging from Twitter, reactions to Trump's portrait are ranging everyone from extreme love to its polar opposite.

In the portrait, Trump appears in front of round window, presumably at the White House, dressed in an all-black suit. Her hair falls loose around her shoulders, she looks directly at the camera in what can best be described as a smize, and her arms are crossed. So far, many Twitter users have commented on the prominence of Trump's giant diamond ring in the photo, as well as its heavily airbrushed look. As the entire Trump family obviously knows by now, everything they do, even actions as seemingly innocuous as releasing an official photo, will come under intense global scrutiny.

In a statement about the official FLOTUS portrait, Trump is quoted as saying, "I am honored to serve in the role of First Lady, and look forward to working on behalf of the American people over the coming years.” The photo already appears on her official White House page.

Some Are Loving The Portrait

Others, Not So Much

The Portrait Seemed To Puzzle Many

While Others Were Just Reminded Of Other Pictures Entirely

Lastly, There Were Many Offers Of Alternative FLOTUS Portraits

And, as expected, there is a deluge of sexist commentary as well. Everything from criticism of photoshop to possible plastic surgery to her past modeling career are being weaponized against the First Lady. Luckily, there are many others who are keeping the sexist comments at bay with humor, earnestness, or serious critique of Trump's political position as a member of the Trump family.

First Lady portraits are an American presidential tradition. And while they vary, Trump's seems to stand apart not only for its photographic style, but also for the various views of the Trump administration that the portrait evokes. Trump's stance, expression, clothing, and jewelry seem to communicate wealth and power, calling to mind some of the president's own portraits both during and before his assumption of the presidency.

Likely next to come will be the First Family's official portrait. And considering the size of Trump's family, it's sure to be a wide one.