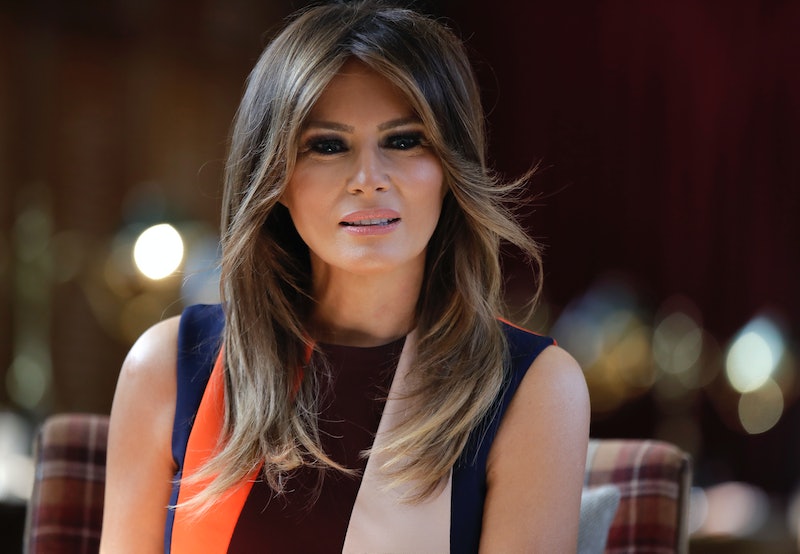 On Friday, first lady Melania Trump responded to Michael Cohen's "Trump tapes," the existence of which was reported earlier in the day. The New York Times reported that Cohen, Donald Trump's former attorney, secretly recorded a conversation wherein the two discussed making payments to Karen McDougal, a former Playboy model who claims to have an affair with Trump. In a statement Friday, however, Melania refused to address the reports, and made clear that she won't be doing so at any point in the future.

"Mrs. Trump remains focused on her role as a mother and as First Lady of the United States," Melania's communications director Stephanie Grisham said in a statement. "We will have no further comment on the topic."

A White House spokesperson told ABC News that "the president says he never had a relationship with McDougal."

Rudy Giuliani, the former New York City mayor now representing the president, confirmed the existence of the tapes after the Times report. Giuliani said that no payment to McDougal was ever made, however, and characterized the tapes as "powerful exculpatory evidence." According to the Times, the tapes are now in the possession of the FBI, which raided Cohen's office earlier in the year.

McDougal's claim that she had an affair with Donald was first reported before the election. However, the revelation that Cohen and Donald discussed paying McDougal two months before the 2016 election raises questions about how much Donald's team knew about her allegations, and when.

Days before the election, the Wall Street Journal reported that McDougal claimed to have had a nine-month affair with Donald, and that the National Enquirer paid her $150,000 for the exclusive rights to her story. But the tabloid never published her account, and McDougal later confirmed to the New Yorker that she signed a confidentiality agreement with the Enquirer's parent company — the chairman of which is a close friend of Donald — banning her from speaking publicly about the alleged affair.

After the Journal story was published in November 2016, Donald's former top aide Hope Hicks said in a statement that "we have no knowledge of any of this." However, Giuliani confirmed Friday that two months earlier, Donald and Cohen had discussed reimbursing the Enquirer for its payment to McDougal — which of course, they couldn't have done if Donald's team had "no knowledge" of McDougal's dealings with the Enquirer.

In a statement to the Daily Beast, Cohen's attorney Lanny Davis said that "when the recording you are reading about is heard, it will not hurt Mr. Cohen." Davis added that "any attempt to spin this story cannot change what is on the tape," which one source told the Beast is likely a reference to Giuliani's claim that the tape is "exculpatory."

In a separate incident from the McDougal episode, adult film star Stormy Daniels has also said that she had a sexual relationship with Donald during his marriage to Melania. In court filings, Daniels has confirmed that she accepted a $130,000 payment from Cohen to remain silent over the alleged affair, which Donald denies ever happened. Cohen acknowledged making this payment to Daniels, and Giuliani later revealed that Donald reimbursed Cohen for it. However, neither Cohen nor the president have said what that payment was for. Daniels has since sued the president for defamation over the incident.