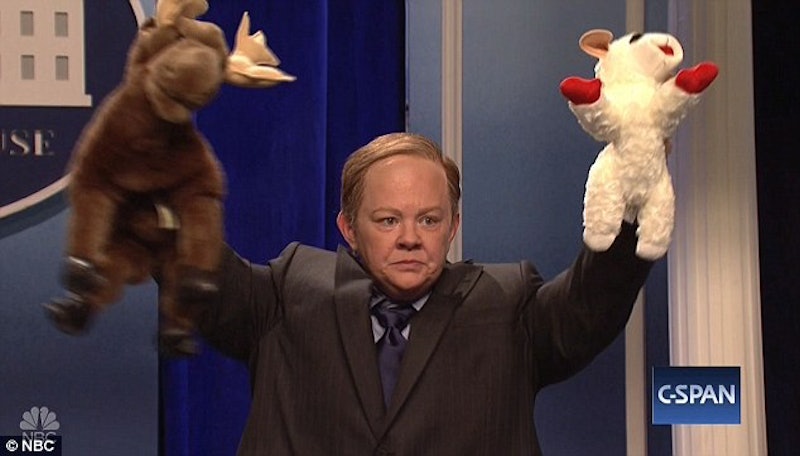 For those who were "with her," Donald Trump's election victory was a rough pill to swallow. Between his Twitter rants, Cabinet picks, and controversial executive orders, Trump's first few weeks in office have done absolutely nothing to ease the concerns of those already wary of having him named commander in chief. But as we ride this tumultuous roller coaster we call Trump's presidency, it's important to remember all of the good things it has brought us. For example, Melissa McCarthy's Sean Spicer impersonation on Saturday Night Live.

Since it aired Saturday, many have called McCarthy's impersonation of Trump's White House press secretary the best thing to come from Saturday Night Live in a while. It's heavy praise considering the late-night sketch comedy show has given us more than a few golden political jokes (thanks again to President Trump) over the last year.

In a surprise cameo, actress and comedian McCarthy brought the White House's first few press briefings to life, complete with Spicer's infamous prop use and aggressive and belligerent berating of the press corps. "I'd like to begin today by apologizing on behalf of you to me," McCarthy yells from behind the White House podium. "And that apology is not accepted!"

Here are some of the best McCarthy as Spicer memes floating around on Twitter:

It's about time Washington began to address America's biggest national security threat. Those radical moose-lambs are out of control.

The Line Between Fact & Fiction Is Getting Blurry

Will the real Sean Spicer please stand up?

Crushing Critics With Podiums Since 2017

It looks like Trump shared a few of the moves he learned from his appearances on the WWE.

Not In My Country

How to tell a radical moose-lamb from a cuddly one.

Feel free to reference McCarthy's massacre of Spicer in your next interview.

And So It begins

Is no one safe from the radical moose-lambs?

Save And Refer Back To When Needed

Sometime one face says it all.

I don't know who let all these moose-lambs into the country in the first place (Thanks Obama), but this is a disaster. Sad!

Those moose-lambs are sneaky. America must remain vigilant against the threat of moose-lambs!

Presidential elections often remind us of our differences of opinion. But it's important to remember to laugh, no matter how contentious things get. And politics aside, it's hard to argue McCarthy's Spicer sketch was anything short of award-winning. Put an Emmy aside for McCarthy, she deserves it for making America laugh again.