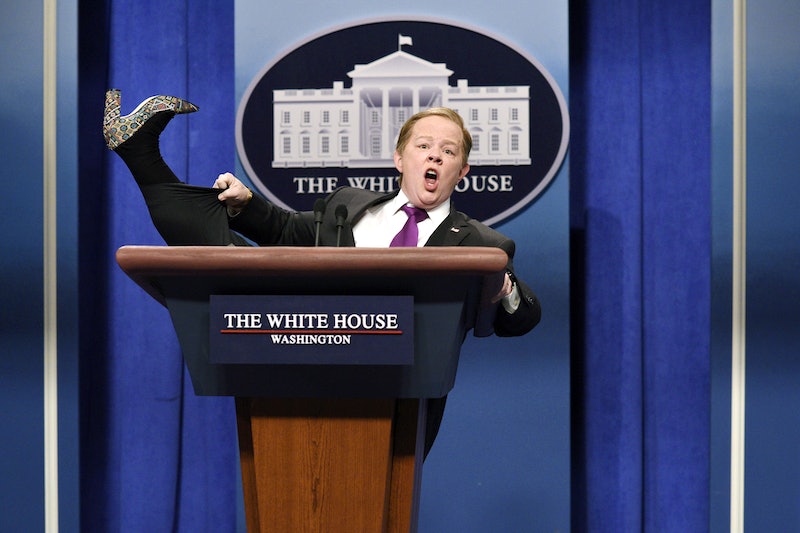 On Friday morning Sean Spicer officially resigned as White House press secretary, ending a stint as tumultuous as it was comedic. Simply put, Spicer's six months as press secretary were nothing short of disastrous: He constantly fought with journalists, ignored facts to advance the president's agenda, and, at one point, sparked major backlash after suggesting that Hitler had never used chemical weapons, despite his use of gas chambers to wipe out 6 million Jews and others during the Holocaust.

Along the way, and as Spicer continued to put his foot in his mouth, Melissa McCarthy developed her own satirical versions of Spicer for Saturday Night Live that were ruthless, blunt, and, frankly, downright hilarious. She embodied his antagonistic tendencies, killed it with the props, and perfected that suit and hair sweep combo.

From hiding in bushes to riding around New York City on Spicer's podium, here are five funniest SNL moments of Melissa McCarthy as Sean Spicer that we'll never forget — even if the man behind the jokes is no longer in the White House.

In an interview with the Washington Post, Spicer revealed he really likes to chew gum and chews "two and a half packs by noon." That's about 35 sticks of gum a day, all before lunchtime. McCarthy took Spicer's gum obsession to a whole new level, saying in the skit, "I have been told that I am going to cut back on chewing gum, so I've cut back to one slice a day" — before proceeding to chew a massive wad of pink gum on the podium.

2. Attacks On The Press

Sean Spicer really didn't like journalists, and McCarthy was quick to poke fun at his callous attacks on the media. In her skits, she acted short-tempered and even physically attacked reporters with props including a water gun, fire extinguisher, and leaf blower.

At one point, she threw a pillar into the crowd of seated reporters, ending the scene by declaring, "I honestly hope she's dead."

3. Hiding In The Bushes

Who can forget this scene: Spicer's deputy Sarah Huckabee, played by Aidy Bryant, is delivering a speech. All of a sudden, the press corps notices someone hiding in the bushes — who could it be?! McCarthy's version of Spicer, of course. Bryant's character declines the allegations — c'mon, the bushes? That is, until a reporter suggests she would be better suited for Spicer's job. At that point, McCarthy bursts through the bushes and attacks the journalist with a fire extinguisher.

"Spicey's back!" she declares to the shocked room. "Sarah's out!"

This skit was a classic — Melissa McCarthy, as Spicer, cruising through the streets of New York City on a moving podium. Throughout the scene, she stayed in character: yelling at slow-moving cars, chewing gum, and eagerly searching for the president.

5. The Kiss Of All Kisses

After traversing across New York City, McCarthy's Spicer finally finds President Trump, played by Alec Baldwin, to question the president's loyalty. Let's just say things got real Spicey, real fast. In the scene, McCarthy confronts Baldwin's Trump and questions whether he'd lied to her. The scene concludes with a tickle fight between the duo and an epic makeout session between Spicer and Trump.

At the end of the scene, McCarthy sums up her role as Spicer perfectly: "I've had a good run!"