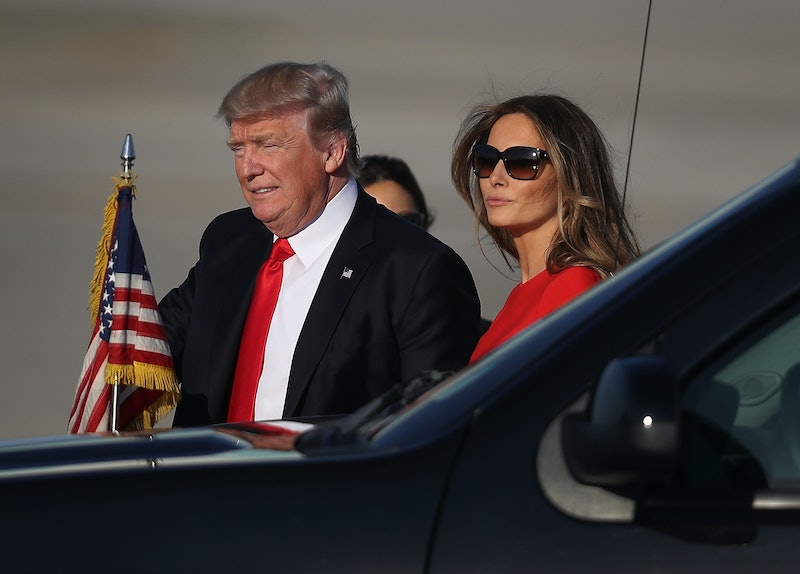 People have wanted proof that the resistance is working, and now it's definitely here. Specifically, resistance in the form of Saturday Night Live skits. Now, maybe that doesn't come as a surprise since President Donald Trump has been tweeting in response to the show for months. But this Sunday there was silence — and according to a report from Politico, that silence is telling. Evidently Trump can't stand that a woman played Sean Spicer, according to an anonymous source who spoke with Politico.

It wasn't Melissa McCarthy's perfect portrayal of the White House press secretary, or the cutting jokes about the White House's communication failures; it was that a woman played him. Here's what Politico reported:

More than being lampooned as a press secretary who makes up facts, it was Spicer’s portrayal by a woman that was most problematic in the president’s eyes, according to sources close to him. And the unflattering send-up by a female comedian was not considered helpful for Spicer’s longevity in the grueling, high-profile job in which he has struggled to strike the right balance between representing an administration that considers the media the "opposition party," and developing a functional relationship with the press.

Did you read that? "It was Spicer's portrayal by a woman" that was the biggest problem in Trump's eyes — and it could affect Spicer's time at the White House." The article suggests he could even be fired over SNL's choice to use a woman in the skit. Politico quoted a top donor who said, "Trump doesn't like his people to look weak."

As for Spicer himself, he took the portrayal in good stride — or the best that he could. He even went on Extra to try and joke back, at least a bit. He said that McCarthy "needs to slow down on the gum chewing; way too many pieces in there." But he also noted that while the show is funny, maybe McCarthy was exaggerating her impression. She "could dial back," he argued.

Now there's also talk that McCarthy won't be the last woman to play someone from Trump's inner circle. Twitter users brainstormed up the possibility of Rosie O'Donnell playing Steve Bannon — and O'Donnell agreed Monday night, saying that she "will serve" if asked.

Alan Sepinwall, writing for Uproxx, argued that O'Donnell could have a bigger effect than the current SNL Bannon, the grim reaper. Trump doesn't have a problem with his adviser being portrayed as evil. But having a woman play him could make a difference. Sepinwall explains:

Portray Bannon at his biggest and sloppiest — while still forcing the classy POTUS himself to sit at the little desk — and that’s something that might actually make Trump question his trust in the man.

If it worked with McCarthy's portrayal of Spicer, it could very well work on Bannon. Especially since Trump has had a public feud with O'Donnell for more than a decade. Now you just have to tune in and see how SNL needles Trump next weekend.