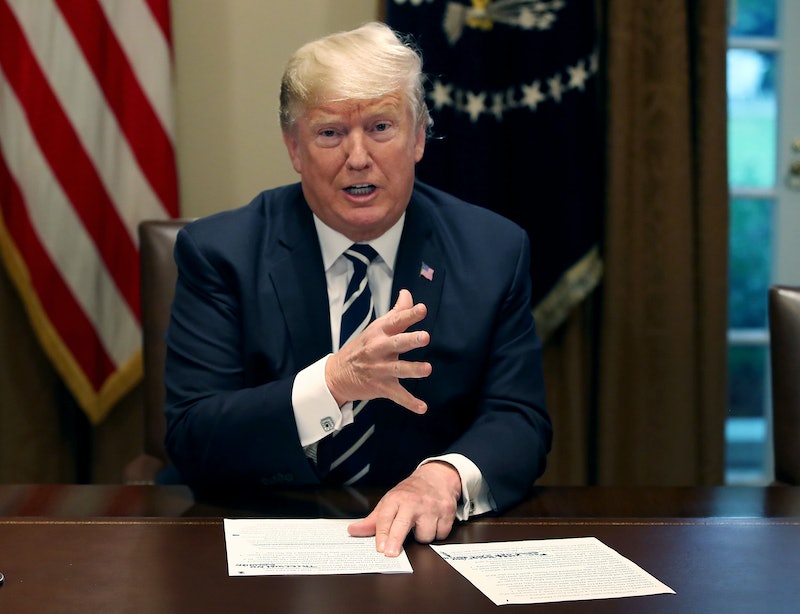 After a day and a half of backlash, the president attempted to dial back remarks he made at a joint press conference with Russian President Vladimir Putin. However, his attempt to set the record straight didn't quite go over well on Twitter. After speaking at a follow-up press conference on Tuesday, President Trump's "would" and "wouldn't" comments on Russia sparked memes and jokes, far and wide.

The press conference with Putin took place following a bilateral summit between the two leaders. When asked by a reporter if he believed Russia interfered in the 2016 election, Trump responded, "I don't see any reason why it would be" Russia.

The president faced swift and immediate backlash, but not just from Democrats. Many leaders within his own party were quick to chastise the president for what they considered to be undercutting national intelligence agencies while on an international stage.

In a press release, Sen. John McCain described Trump's press conference with Putin as "one of the most disgraceful performances by an American president in memory."

"The damage inflicted by President Trump’s naiveté, egotism, false equivalence, and sympathy for autocrats is difficult to calculate," he said. "But it is clear that the summit in Helsinki was a tragic mistake."

The public response to Trump's move toward correcting himself was not initially positive either. Twitter did as Twitter does, and used comedy in response.

More like this
For Alexia Del Valle, Her Latinx Roots Influence All Of Her Content
By Alexis Morillo
15 Halloween Costumes Inspired By TikTok Trends
By Emma Carey
Why TikTok Is Obsessed With Caesar Salads Right Now
By Alexis Morillo
Behind The Hilarity Of The "POV: You Walk Into My Room" TikTok Trend
By Lexi Inks
Get Even More From Bustle — Sign Up For The Newsletter