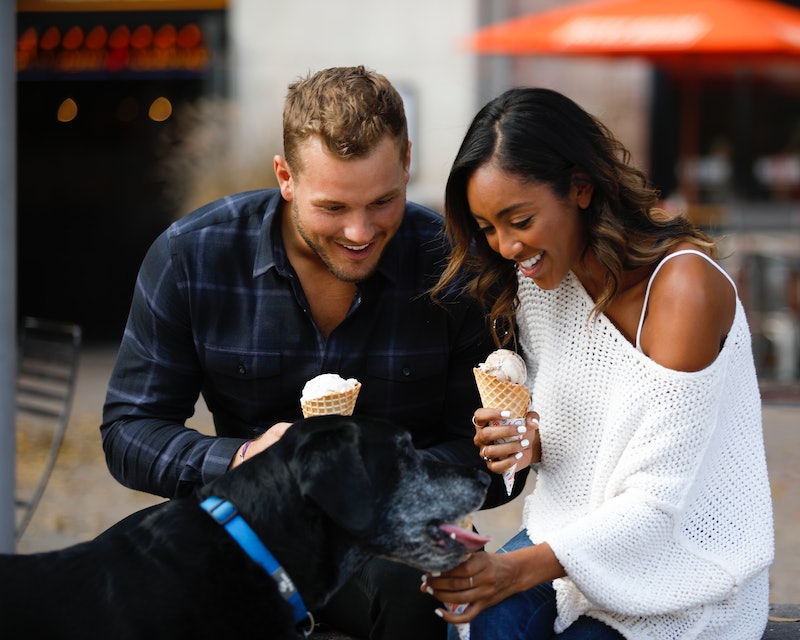 After seasons upon seasons of The Bachelor, hometown dates have become a little repetitive — how many family dinners can fans really watch without getting at least a little bored? But on Monday night's episode, one of Colton Underwood's final four decided to mix things up a bit. Tayshia and Colton went skydiving on The Bachelor, and now, Twitter can't get enough of it — but as epic as this moment really was, what people actually want to see is the fence jump that people have been waiting for all season long.

Despite the fact that Colton (and Tayshia, for that matter) is afraid of heights, when he arrived in town for her hometown date, she surprised him with an adventure: sky diving, obviously. And yes, Colton looked absolutely terrified during the entire lead up to jumping out of the plane, from the moment he found out that was what they were doing that day through the safety lesson they got before the jump, all the way through the plane ride up. But once he and Tayshia actually jumped out of the plane, the adrenaline hit him and he was so glad it was something that they got to do together.

Immediately, fans reacted to this surprising moment on Twitter, and most of them really, really just wanted to see less of Colton jumping out of planes and more of him jumping over fences. And honestly, after how heavily teased that scene has been since night one — and how it seemed like it was actually going to happen last week and then it didn't — it's hard to blame people for feeling that way. Yes, the sky diving date was cool, but is it cooler than finally solving a mystery that has existed in Bachelor Nation for actual weeks now?

And this tweet made a very important point: Of all the different types of jumps we did get this season, the one kind we did not get is actually the kind we've all been waiting for. What is the deal?

But others couldn't help but make Bird Box comparisons, because let's face it: In this age of our pop culture, if you use a blind fold in any capacity, there are going to be Bird Box references galore.

Then, there was this tweet, which pointed out that these two just keep using power moves that are so far beyond the rest of us that they must be operating on an entirely different level:

Will we ever know why Colton jumped over the fence? Maybe not. But we do know that he's capable of jumping out of a plane, which is something that not even Colton himself knew he was capable of before the filming of this episode took place. Good for him for taking a risk — and good for Tayshia for coming up with a plan that created such a cool hometown date. Now, about that fence jump. Let's have it, ABC.