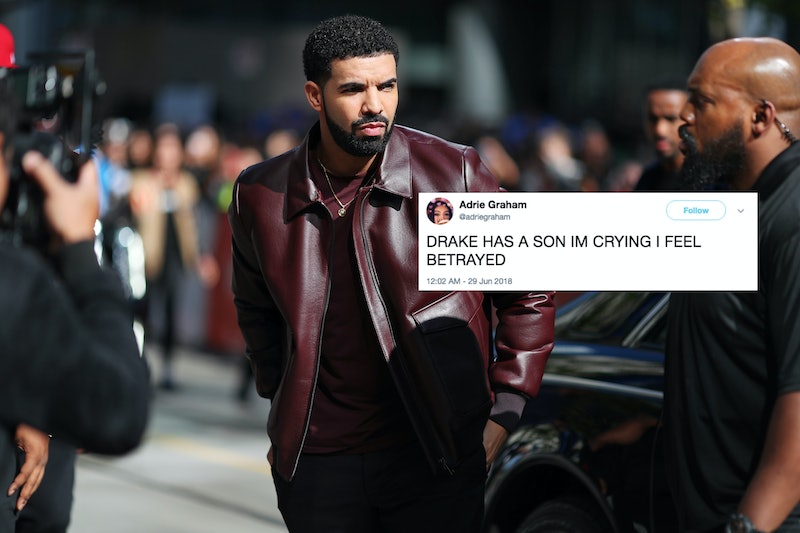 Move aside Cancers, Scorpio season has come early thanks in major part to Drake’s new album Scorpion. And as you probably know, with a new Drake album comes new memes. The artist has remained relatively silent about his upcoming project, forgoing regular promotions. Instead he’s opted for a more secretive, pop-up approach utilizing billboards and social media to the fullest. According to his fans on Twitter, it seemed to have paid off. Memes and tweets about Drake's new album Scorpion are absolutely shook over lyrics confirming, yes, the artist says he has a son.

Drake began teasing the Scorpion project in April when he posted a picture of himself wearing a jacket with the the word “scorpion” embroidered on it with “June Twenty Eighteen” underneath it. Later, he posted a picture of a diamond encrusted scorpion chain. The 25-track album will be the best of both worlds for Drake fans since it has both an A side and a B side, according to billboards promoting the album in his hometown of Toronto. On top of that, Drake worked with the likes of Jay-Z, Ty Dolla $ign, and producer Static Major. In fact, the album even features a posthumous Michael Jackson collaboration. But the biggest surprise of the album came on a song called "Emotionless" where the artist presumably admits that he has a son. Still, fans had their suspicions all along. Pusha-T was first to make the claim on his track "Adidon," when he broke the news that Drake was supposedly "hiding a child."

Following the release of Scorpion, Drake will embark on his Aubrey and the Three Amigos Tour with Migos in early July. Here's what Twitter thinks so far: