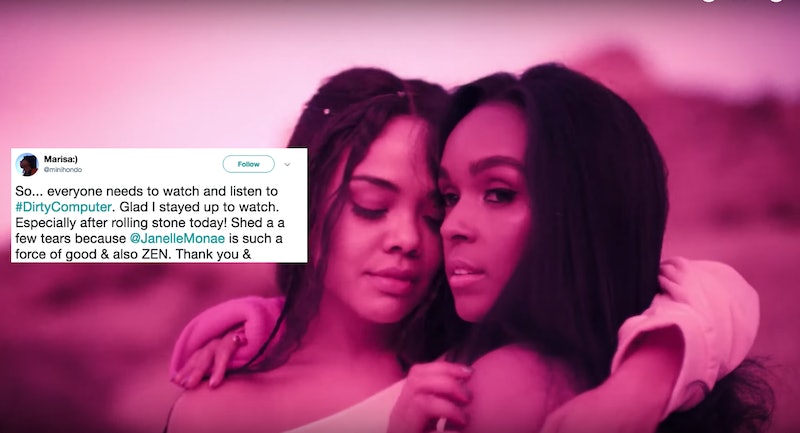 Early Friday morning as the clock struck midnight, one artist in particular graced the world with both an inspiring new album and film. Minutes after both projects were released, Twitter was lit with memes and tweets praising Janelle Monae's new album Dirty Computer, which celebrates queerness, self-love, and empowering women. And it's not just about embracing queerness when it comes to sexuality. Monae wants you to also accept the things about yourself that might make others uncomfortable. And by the looks of it, people are already getting inspired.

She explained the album title Dirty Computer in an interview with iHeartRadio:

We come from dirt and when we transition out we go back to dirt. […] We’re CPUs, our brains are uploading, downloading, transmitting, passing back and forth information. And with all computers you got your bugs, you got your viruses. But are those negatives, positives, features? Or not? I think it’s a conversation I want to have with us as a society, as human beings, about what it means to tell somebody that their existence, either they’re queer, minorities, women, poor, makes you have bugs and viruses. […] it’s about embracing those things even if it makes others uncomfortable.

The artist went on in the interview to describe how the writing and recording or Dirty Computer was like therapy as she questioned what it meant to be a young, black woman living in America.

Her third album release comes the same week Monae also presented a 45-minute "emotion picture" for the album, a list of upcoming tour dates, and her coming out as pansexual in Rolling Stone. It looks like Monae is on a roll and this is what fans are tweeting so far: