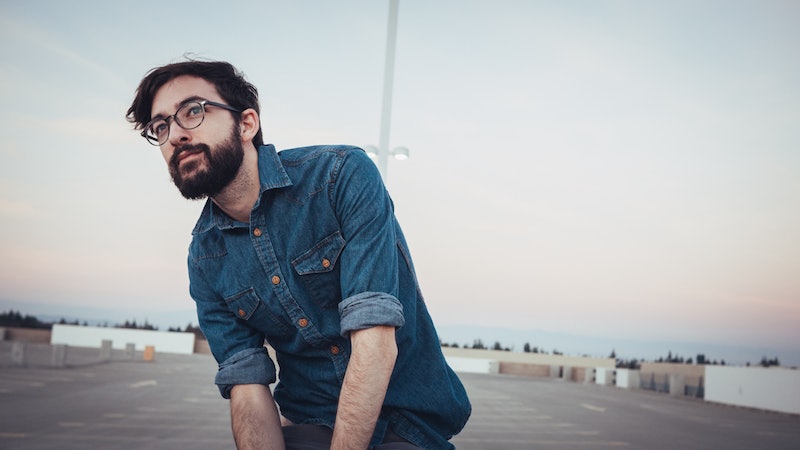 Historically, men haven't exactly been encouraged to express their emotions. With this in mind, it's no surprise that men don't go to therapy as much as women, and researchers are trying to figure out why men tend to shun therapy in favor of assuming the stereotype of the strong, silent type. One barrier for men seeking treatment for mental health issues dates back to the inception of psychotherapy. "Basically, psychotherapy was originally created by men to treat women," Ronald Levant, a former head of the American Psychological Association and professor at the University of Akron, told Tonic. Some people may be quick to joke that men have it easy it every other aspect of their lives — but when men are three times as likely to die by suicide as women, as the American Foundation for Suicide Prevention reports, the issue of making therapy accessible for men becomes a very serious one indeed.

Everyone likely has a father, brother, partner, friend, etc., who needs therapy but who is unwilling to take the steps to get help. There is a higher stigma for men with mental health issues than there is for women, and approaches to therapy exist for almost every subgroup — women, LGBTQ people, minorities, the elderly — but there is not yet a specific approach to treating men, Tonic reported. According to Dani Bostick on the Good Men Project, who decided to seek help for her anger issues, finding the right therapist can be a major barrier to seeking therapy, even if you know you need it.

"It was harder than I anticipated to find someone to help me manage my rage. Therapy centers with names like Wellspring of Fountain Healing with Tears and Connection appealed to me as much as the human interest story about a football player’s three-legged, cone-of-shame-wearing rescue dog before the Super Bowl," Bostick wrote. "I wanted to quell my anger, not venture down the windy path of emotional discovery and self-reflective insight. I thought a scene from a horror movie would have been a more relatable image than flowers, cairns, and peaceful women looking zenned-out."

Speaking from personal experience, trying to find a therapist you can relate to who also takes your insurance can feel more difficult than trying to move an object with your mind. Add in the fact that therapy isn't designed for men, and many are likely to give up because not dealing with mental health issues can feel easier than doing what's necessary to get the right treatment.

Another thing to consider is the additional barrier black men face when trying to seek therapy. According to a study published by Princeton University, therapists were less likely to accept men of color as clients even when they had the same insurance as their white counterparts. Lack of access coupled with an approach that doesn't meet men's needs can set them up to fail when they do try to seek help.

Once a man does choose a therapist, the approach of therapists needs to be different as well, Zac Seidler, psychologist Ph.D. candidate at the University of Sydney in Australia, explained in an article in the journal Australian Psychologist. For example, it's important to understand that the same things that motivate women don't necessarily motivate men because of how each gender is socialized.

"It would be more appropriate to use masculine traits like risk-taking and wanting to regain strength to our advantage," he explained. "Men tend to want an idea of how treatment is going to work from the outset, a structured plan for working towards recovery, the power to gain skills that help them deal with depression and to feel in control of their lives."

Psychiatric Advisor outlined how therapists and psychiatrists can better set their male patients up for success. "Men who are reluctant to delve into the past or are not introspective may benefit from [cognitive behavioral therapy] to address the negative thoughts that might be contributing to depression or anxiety," Dr. Michael Myers, professor of clinical psychiatry SUNY-Downstate Medical Center in Brooklyn, New York, told Batya Swift Yasgur for Psychiatric Advisor.

Myers also recommended removing the stigma of seeking therapy by treating it like any other medical necessity. "I compare the therapist to a dentist or cardiologist, which destigmatizes the experience of receiving therapy and addresses the fear of dependence," he explained.

While the world is set up for men to succeed in almost every way (which is a different topic), lack of modern therapy options for men hurts everyone. Because men not seeking therapy, or not being able to access therapy, can manifest as negative behaviors that adversely affect those around them, making therapy more accessible to men is a win for everyone.

Correction: A previous version of this story referred to Dani Bostick as "he". It has been updated to accurately reflect her gender.