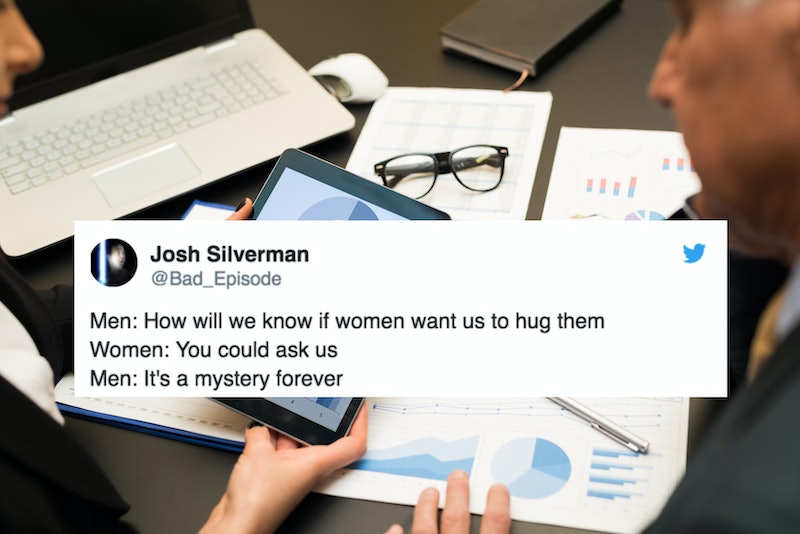 These are trying times. Twitter is at its wit's end; global warming is changing the face of the planet as we know it; people are melting candy canes on their pizza; and, apparently, men don't know if they're allowed to hug women in the workplace.

This recent concern started with an article published by The Associated Press and shared by CBS Los Angeles, titled, "In Wake Of Weinstein, Men Wonder If Hugging Women Still OK." The article talks about feelings some men are experiencing now that so many women are reporting sexual misconduct in the workplace; unfortunately, many of the points made in the piece seem to miss what qualifies as "misconduct" and trivialize what, for survivors of harassment and assault, is a very real issue. Aside from their concerns about hugs, the article features snippets of interviews with various men in business roles speaking about how difficult it is to figure out how specifically they can touch or speak to a woman in the workplace — if it's "gotten to the point now where men can’t say, ‘That’s a nice dress’" and whether or not they can ask a female intern to fetch them coffee. Questions that not only miss the mark on what constitutes harassment, but minimize the very real issues and incidents that occur in the workplace.

In other words: yikes.

True, there are some kinds of acceptable behaviors that vary depending on the office. What constitutes harassment, however, does not. And, as many people are pointing out, whether it is "accepted" or not, there really is no need to hug someone in an office setting — and anyone's concern about not being able to do that is, frankly, concerning.

Outrage was further sparked by the way the the men in the article seemed to view themselves as victims in situations of sexual harassment, when the support should be focused on the people dealing with it — many of whom are just finding the courage to come forward with their stories in the wake of the last few months.

CBS Los Angeles shared it on Twitter on Dec. 4, and, well, it didn't go so well with some of the readers. People minced no words at expressing their thoughts. Here are some of the more memorable responses.

Work Is For Work Only

She makes such a good point at the end, there. "If I hug Bob, is he going to take it the wrong way?" has probably never crossed the minds of the men thinking the same thing about women.

I'm gonna have to go with NO.

Even Elementary School Kids Get It

Come on, guys. You gotta keep up with the kids.

When in doubt, ask. Asking for permission isn't weird. It's respectful.

Is This Even Real?

Nope, not an Onion article.

How Is This A Question?

Is it really that difficult?

Nobody Is Entitled To Another Person's Body

Amen. Women's bodies aren't property to be used as people wish. They don't owe anything anything.

An Easy Rule Of Thumb

This will always keep you out of trouble.

What Kind Of Hugs?

Not that it matters, but are these regular hugs... or creepy hugs?

Some women don't want to be hugged, period, and that's OK.

Yes Means Yes, No Means No

Twitter feels so bad for you fellas. Actually, not really.

Just Because It's The Norm Doesn't Mean It's OK

Honestly, the one good thing to come out of this article is quality use of this Spongebob meme.

How about more discussions with survivors about the treatment they receive and how we can all be better people?

This isn't even doing it justice. See all the amazing Twitter responses here.

There are so many things wrong with this discussion that even with all of the quality commentary online, it's hard to know where to even begin. This piece is undoubtedly controversial, but it serves as an important reminder: there are still people out there confused about what exactly sexual harassment is, why it's harassment, and why it's a problem — particularly for women.

Another disappointing part of all of this? These thoughts could have been expressed in a meaningful, productive way, by the people in question reflecting on their own insecurities rather than projecting them on women.

For instance — if anyone truly feels confused or concerned because they're not always sure what's work-friendly and what isn't, it's as simple as asking the person, and then respecting their answer. They can express the desire to be a part of creating a safe environment where everyone feels protected, rather than creating an environment where abuser's actions are. It is, and always will be, that simple; in any case, it's evident that in some offices around the nation, a refresher on sexual harassment in the workplace is long overdue.