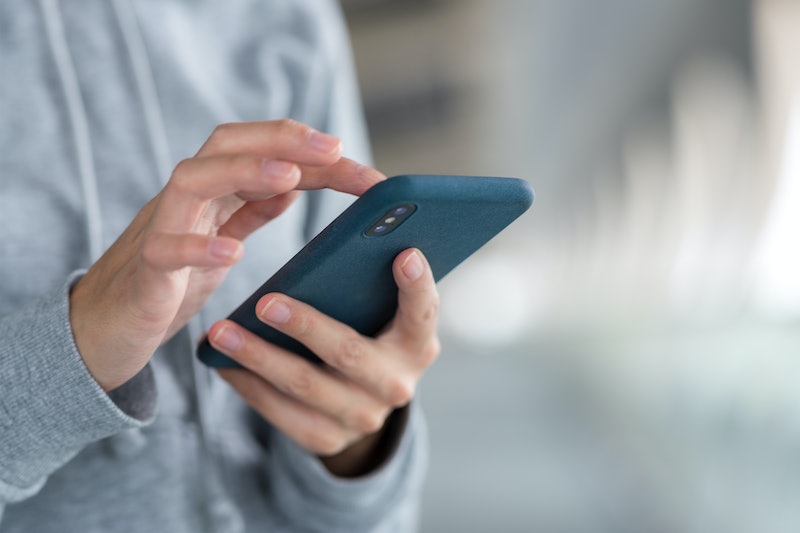 If you have ever struggled with anxiety, depression, or any other mental illness, you are not alone — around one in five adults live with a mental health condition, the National Alliance on Mental Illness says. But as common as mental health issues can be, there are still several obstacles that people face in getting help. Mental health services can often be financially out of reach, and the taboos and stigmas attached to mental health conditions make it hard for many people to open up about living with the conditions. That’s where illustrations on Instagram come in: while Instagram is also home to many mental health professionals making stigma-busting content about mental illness, illustrators — who are often regular people who struggle with mental illness themselves — can feel more personal to interact with.

According to Dr. Nicole Taylor, an associate professor at Texas State University’s Anthropology Department who researches social media trends, plenty of studies have found correlations between social media use and negative mental health impacts. She adds that there are plenty of positives to sharing on social media, like developing and disseminating creative ideas and the opportunities for community engagement, not to mention "expanding connections through shared interests; and connecting with a more diverse, global community than is possible through face-to-face engagement." Still, Taylor says, "those connections lack the depth of face-to-face interactions, resulting in feelings of loneliness," and she's not aware of research that looks at how being a part of an online community can help people with mental illness.

Anecdotally, however, creators on Instagram say they find great value in the communities they've created online. As illustrator Holly Chisholm of Just Peachy Comics tells Bustle, she’s been drawing since she was in elementary school. After falling out of the habit, she started up again after being diagnosed with depression in late 2016.

“I had just gone through a really bad breakup and I’d moved to LA," Chisholm tells Bustle. "I didn’t know anyone so I was just struggling. I went to a therapist ... and she suggested that I start journaling.” While she didn’t love the journaling format, she wanted to challenge herself to create something new every day. “I started doing these comics as kind of a daily thing, and part of the thing that was keeping me going was sharing them on Instagram,” Chisholm says. Her art often shares facts about mental illness, the positive role that pets can play in a person’s mental health, and a peach-haired woman wearing a peach and white striped shirt, who’s meant to represent Chisholm.

Chisholm’s art-based account is just one of many gathering followers by the thousands and creating online places where mental health is discussed. While the conversations started by these accounts can’t replace reaching out to a mental health professional, they can make it easier to start having these conversations, period. Talking about depression in the comments section of a drawing of a woman napping, for example, can be less intimidating than engaging with a mental health professional, both online or in person. This is especially true when you know the work is inspired by real people’s experiences with mental illness.

There are a few scarce online spaces to “express unfiltered sad emotions,” Taylor says. These include finstas and anonymous Instagram accounts, and illustrations can create this semblance of anonymity. But Taylor says, among teens she's interviewed as part of her research, there is a "widespread perception" that people who posted sad things online didn't have offline friends, which gave a bad impression about expressing sadness online. Other teens said that expressing sadness online felt like "a cry for help," Taylor says. That's why coupling posts expressing raw emotion with resources to help manage those emotions can be invaluable to people scrolling past those images on Instagram.

Nalgona Positivity Pride (NPP), which was founded by Gloria Lucas in 2014, is an online platform that tackles topics relating to mental health through content on eating disorders and body image. “When I first started Nalgona Positivity Pride, it was out of need because I never saw or heard stories that reflected my relationship with food and my relationship with my body,” Lucas says. Though Lucas does a lot of her work outside of her Instagram page, which reposts illustrations and photographs from different artists about subjects like embracing your body and self-care, Instagram allows her to connect with almost 90,000 followers at once.

Factors like race and gender can influence someone’s experience of mental illness because of the ways stigma in communities of color, prevent people from reaching out for help. People of color, particularly Black and Latinx Americans, use mental health services half as much as white Americans, and Asian Americans use these services around a third of the same amount, NAMI reported. Considering that many people of color often don’t, or can’t, get the mental health services that they need, these Instagram accounts can be a way to find community.

“There is this notion of being the strong, Black woman and then we have these stigmas of the angry Black woman. As a Black woman, you have to grind and hustle, and you have to be always two or three steps ahead of the game, and you can’t fail and you can’t cry,” Amani Richardson, the Editor-in-Chief of Sad Girls Club, a platform created by mental health advocate Elyse Fox in 2017, tells Bustle. Sad Girls Club is run by a team of women of color, and the account has about 210,000 Instagram followers. The Club reposts illustrations from various artists on topics like the validity of your feelings, setting boundaries, how to support others that may be struggling, and therapy.

“We really like to make sure that our content is very open and inclusive,” Richardson says. “Although we are women of color-driven, and that’s who we aim to focus on, people do realize that we are very inclusive and we are open to accepting everyone. I think acceptance is super important along with inclusivity, especially when talking about mental health.”

Illustrator Sonaksha Iyengar also centers women of color in her drawings on Instagram, while discussing mental health with about 13,000 followers. “Across the world, but all the more in South Asian societies, the whole idea of mental illness is super taboo. You get used to people just saying that it doesn’t exist,” Iyengar says. One of her most well-known drawings is called A-Z of Mental Health, a series that discusses living with mental illness, and she regularly incorporates text alongside elements of nature in her illustrations.

As for the reception to her work, Iyengar tells Bustle, “I think I’ve been lucky [to] have found the loveliest people stumble upon my page and just say the nicest things and kindest things, and it’s really heartwarming. Of course there are days where there are trolls and bullies who just get into your DMs... for me honestly, I just continue to share for the community that has [supported] me.”

Stigma against mental illness can come from many sources, including family, friends, or coworkers. The Internet can also be full of disapproval or negative comments, which can take a toll on mental health. Setting boundaries about what they share online in regards to their personal mental health is part of the work that these creators do. For Chisholm of Just Peachy Comics, there are certain topics that she says that she doesn’t share online because she doesn’t think they’re that interesting, or that she doesn’t “want to drag other people into," such as issues concerning her family or IRL friends. Self-care policies have been established at Sad Girls Club for employees, which help the team if they need a shoulder to lean on or someone needs a break, Richardson says.

For illustrator Beth Evans, there are certain topics that she said she prefers to talk about with people like her family and friends face to face, rather than posting on her feed, where she posts comics about emotions. Part of the reasoning behind this, according to Evans, is the negative feedback that’s sometimes aimed at her online. To date, she has around 300,000 Instagram followers, and says that people have written to her every continent about her drawings. Much of her art features a nameless, genderless black-and-white blob, and the comics focus on its feelings and what it’s going through. Her illustrations preach positivity, but she says she’s subject to negativity online.

“[Criticism and trolling] hasn’t stopped me yet. I guess I had thicker skin than I originally thought because I’m a huge baby, I will cry at everything,” Evans tells Bustle. She adds that she tries to look for the positive comments in order to tune them out. “This kind of gives myself a mental pep-talks to keep doing [my art], even when I don’t feel like doing [it].”

Trolling and online bullying are serious problems on the Internet, and content creators discussing mental health aren’t immune to detrimental comments. As a result, managing their responses to negativity is also part of their personal mental health journeys. However, many of these creators aren’t just engaging with others to discuss mental health online; they’re also taking their messages and art offline as well.

Chisholm and Evans have had books of their comics published. Sad Girls Club creates in-person events in addition to their online platform, and Lucas from NPP gives talks internationally. Moving forward, Lucas said that one of her “long-term goals is to open up an eating disorder center that’s centered around ancestral ways of healing … that’s specifically geared at indigenous and people of color.” She’s also working on a book with an eating disorder therapist.

Talking about mental health isn’t easy to do, but it’s necessary to continue to open up and create safe spaces. “Mental health is a maintenance thing. It’s something that people sometimes really have to work at like all the time, and there will be times where you don’t feel so great or things really feel not good, and it’s about working through those times, too,” Evans says.

“I feel like sometimes with social media, we all can get a bit overwhelmed with the whole performative part of it,” Iyengar says. “It is nice to know that we’re all just humans and to connect with that part of each other.”