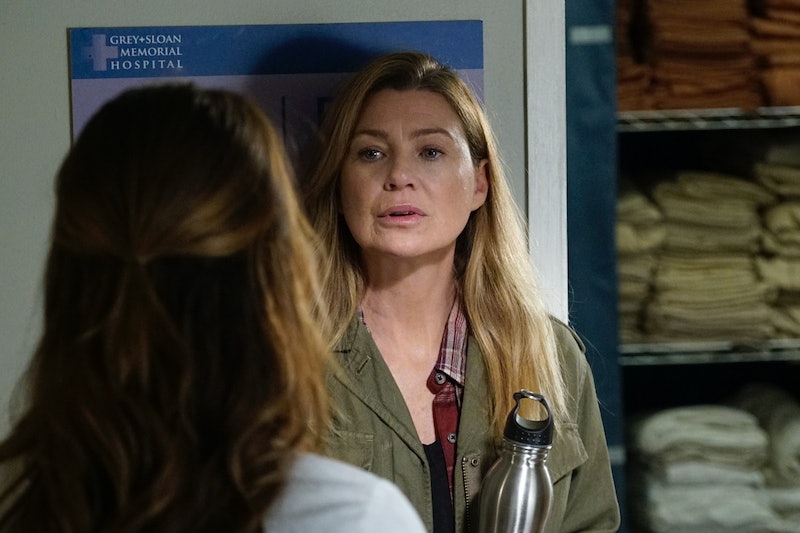 Well, Grey's Anatomy fans, the thing that we thought was never going to possibly happen is actually happening. Meredith is in jail on Grey's Anatomy. Well, she's going to jail, because she is in contempt of court and, in typical Meredith fashion, had to do something way more important than her very, very important court date. (Zola was sick.)

As you might remember, Meredith was fired from Grey Sloan and could maybe possibly be losing her medical license because of a little thing called insurance fraud. Meredith took her licks and her community service, but Meredith has never been one for following the rules, and when she saw the gross inequalities of the medical and insurance industrial complex, she opted to try and help the children and the people living in poverty rather than show up to a little thing called court-mandated community service. And she was totally about to go to court to argue all this, but then her daughter, Zola, had to get emergency brain surgery because of her spina bifida, and she missed her court date. Now, Meredith, according to the judge, gets to make up her community service hours in the slammer.

Kudos to Grey's Anatomy showrunner Krista Vernoff for dangling her heroine over the edge of a cliff. Because Meredith stopped to care for the children of the world and also her own children, she now must head to jail, where she can't take care of anyone. She's now stuck behind bars, neutered and unable to do much of anything. And Vernoff said that's all by design, because, as she told E!, we've seen Meredith do all kinds of illegal stuff (LVAD wire coverups, smuggling in Megan Hunt's kids, etc.) and never face consequences. Now, she's facing them.

"It will shock the hell out of the audience when very real consequences and ramifications come down because of it," Vernoff said. "And very real consequences and ramifications have come down." Of course, Meredith will get out of jail because she's Meredith Grey and she always gets out of things. This time, it won't be easy, but because Meredith's heart is in the right place, perhaps she'll get a pass this time? Meredith didn't skip her community service because she didn't feel like going. She didn't miss her court date because she was lazy. For Meredith, missing these things is a matter of life and death, and she's not sorry that she doesn't think what she did was wrong. Insurance fraud is technically a crime, but is it less of a crime because the whole insurance and medical industry seems predisposed to discriminate against the poor and uninsured?

Meredith sees the flaws in the system, and honestly, it's a flaw in the system that a doctor who wants to do such good is the one who gets thrown behind bars. The show is Grey's Anatomy, so Meredith Grey will always climb back on top — but if she's in jail, it won't be as easy as it was before.

More like this
Shonda Rhimes Responded To The Surprise Exit Of A Day 1 'Grey's Anatomy' Figure
By Grace Wehniainen
Netflix Shut Down 'Bridgerton' S3 Rumours About A “Very Dark” Storyline
By Bustle
Linda Ronstadt’s “Long Long Time” Plays A Pivotal Role In The Last Of Us
By Brad Witter
Taylor Swift Visited The 'Glee' Set For This Bizarre Season 5 Episode
By Grace Wehniainen
Get Even More From Bustle — Sign Up For The Newsletter
From hair trends to relationship advice, our daily newsletter has everything you need to sound like a person who’s on TikTok, even if you aren’t.