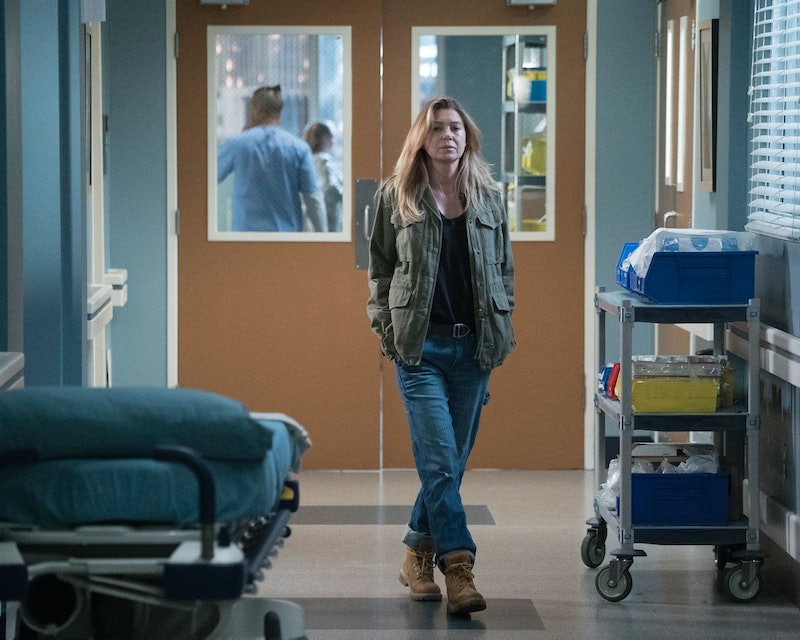 Since the show's inception back in 2005, Grey's Anatomy has always had one central focus: Meredith Grey's journey as a doctor. But what if that were to suddenly come to an abrupt end? What if Meredith loses her medical license on Grey's Anatomy and stops being a doctor altogether? What would that mean for the show? What is the Anatomy of the series if it's no longer about Grey's? That is just some of the many questions getting raised after last Thursday's Season 16 premiere, which ended with Meredith learning that the medical board plans to pursue revoking her license, which would make it impossible for her to practice medicine ever again.

The mere thought of Meredith no longer being a doctor seems almost impossible to fathom. She's worked so hard to get where she is and now there's a distinct possibility that it can all be taken away. This shocking news served as a stark contrast to the overall light-hearted tone of the episode. Initially, Meredith thought that her confession to committing insurance fraud would result in her immediately ending up in jail. (She's already said emotional goodbyes to her kids and everything!)

But ultimately, she managed not to serve any time and just ended up being given quite a bit of community service. She even admitted to DeLuca that she kind of enjoyed the simplicity of the tasks, not to mention that she was helping the environment. But that positivity came to a crashing halt when she received a text saying that her medical license is in jeopardy.

Some fans may not feel all that concerned about Mer's fate, feeling confident that the writers will find some one for the character to salvage her career like she's done so many times before. After all, she's the show's main protagonist and since the majority of the action takes place at the hospital, the only logical conclusion is for Meredith to return to work at some point... right?!?!

As of now, Ellen Pompeo and the Grey's writers have remained mum about the whole thing, so it's difficult to know if this is just another red herring of it Meredith's medical future could truly come to an end. Grey's Anatomy has already been renewed through Season 17 and Ellen Pompeo has extended her contract with the series for the same amount of time, indicating that Meredith's story is far from over. Granted, that doesn't necessarily mean that Meredith is guaranteed to remain a doctor throughout that time, though it certainly bodes well for the odds of that happening.

But when it comes to Grey's, it's impossible to know what direction the story will go. Could the show still work without its No. 1 surgeon scrubbing in on major surgeries? Could she still be involved in the hospital in some other way without being a practicing doctor? These are all possibilities the show could explore, so when it comes to the fate of Mer's character, don't make any assumptions just yet.

More like this
Ellen Pompeo Is Stepping Back From 'Grey Anatomy' For More Than Half Of Season 19
By Brad Witter and Sophia Moore
Watch The Trailer For Netflix’s Edgy New Comedy 'FAKES'
By Brad Witter
Here’s The True Story Behind 'A League Of Their Own'
By Morgan Leigh Davies
Does 'Locke & Key’s Ending Mean There Could Be A Season 4?
By Sophia Moore
Get Even More From Bustle — Sign Up For The Newsletter