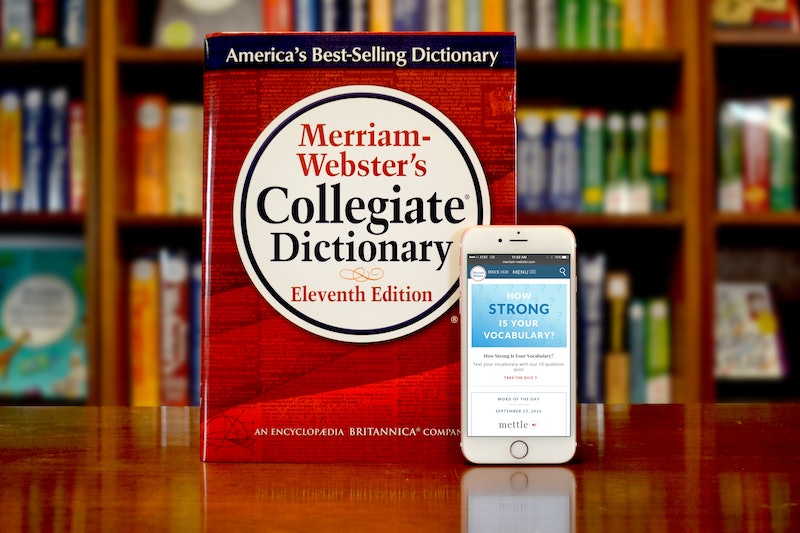 Anyone else get incredibly frustrated by that little red squiggle underneath words you use on the daily? For some of your go-tos, that may soon be a thing of the past. Merriam-Webster added 840 new words to its dictionary as of September 2018, including Latinx, zoodles, and guac. TL;DR (yes, that’s another one of the words that’s now officially in the dictionary): This is pretty big news.

If you don’t get why the dictionary adding Latinx to its pages is kind of a big freakin’ deal, let me break it down for you. Brief recap of eighth grade Spanish: the vast majority of words in Spanish are assigned a gender, with “masculine” words generally ending in -o and “feminine” words generally ending in -a. (There are a million and 12 exceptions to this, but that’s the basic gist.) Therefore, Latinx (pronounced latin-EX) is the gender-neutral form of latino or latina, aka, a descriptor for someone who identifies with having heritage from Latin America. While there is no definitive history of the word (though Merriam-Webster says it was first used in 2007), it’s generally thought that Latinx developed in the queer community and on college campuses as a more inclusive version of “Latino/a” or “Latin@,“ since the “x” ending is nonbinary. (You can do the same thing for other words in Spanish, like with “amigxs,” or friends.) Some people also suggest “Latine” as a potential solution to the issue of gendered language in Spanish, but it’s much less common.

Some people, however, are against the usage of Latinx because it “doesn’t sound Spanish,” or because it has origins in an elite population, i.e., with college-educated folks. Furthermore, using an umbrella term for a hugely diverse group of people that spans from Cuba to Brazil to Chile also has negative connotations unto itself: “One of the most stubborn aspects of America’s racial imagination is the insistence on having a term to separate and identify people of Latin American descent,” Daniel Hernandez wrote for the Los Angeles Times in an op-ed against the use of the term in 2017.

Other words added to the dictionary include marg — yes, as in “margarita” — Instagramming, bougie, and adorbs.

But the reality is, many of us have a lot of pride in claiming the Latinx (or Latin@, or Latine) label. And for many queer, nonbinary, or agender Latinx folks, it’s important that this designation, like Mx. or other nonbinary terms that have evolved from binary language, have a seal of approval from no authority less than the official dictionary. While other dictionaries, like the Cambridge Dictionary or the Oxford English Dictionary, have added Latinx to offerings in recent years, Merriam-Webster’s update demonstrates that the term’s popularity shows no signs of letting up just yet.

So, yeah — this is *pretty* cool news. But the fun doesn’t stop with the inclusion of Latinx. Other words added to the dictionary include marg — yes, as in “margarita” — Instagramming, bougie, and adorbs. Oh, and did I mention hangry got a mention as well? These exciting new updates are yet another reminder that language isn’t static — it changes as we do.