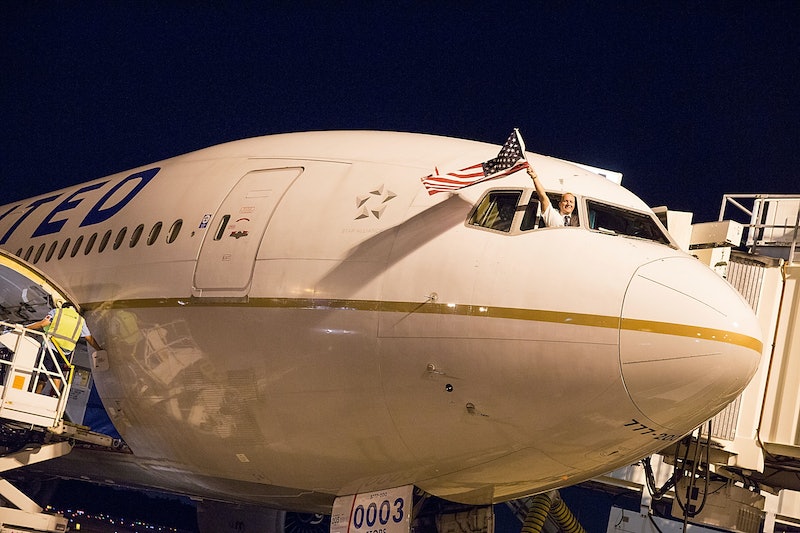 United Airlines is facing controversy over a video that surfaced Monday in which a passenger, after refusing to deboard an overbooked flight, was forcibly dragged by his arms through the aisle by security. In a statement, the airline explained that the man "refused to leave the aircraft voluntarily"; shortly thereafter, the folks at Merriam-Webster trolled United Airlines by writing a blog post dedicated to explaining the definition of "volunteer."

"Flight 3411 from Chicago to Louisville was overbooked," United Airlines said in its statement. "After our team looked for volunteers, one customer refused to leave the aircraft voluntarily and law enforcement was asked to come to the gate. We apologize for the overbook situation."

According to Merriam-Webster, searches for the word "volunteer" on its website increased 1,900 percent on Monday, when the airlines' statement was released.

"Volunteer means 'someone who does something without being forced to do it,' especially a person who joins the military or who does work for no pay," Merriam-Webster wrote in a blog post. "Some of the interest in the definition of volunteer may come from the wording of the statement from United, since a person who did not volunteer to leave was then described as refusing 'to leave the aircraft voluntarily' — and subsequently being forced to do it."

According to a letter that United Airlines CEO Oscar Munoz sent to employees, crew members initiated the airline's "involuntary denial of boarding process."

"[W]hen we approached one of these passengers to explain apologetically that he was being denied boarding, he raised his voice and refused to comply with crew member instructions," Munoz wrote. "Our agents were left with no choice but to call Chicago Aviation Security Officers to assist in removing the customer from the flight. He repeatedly declined to leave."

As crew members were attempting to remove him, the man insisted that he was a doctor who needed to see patients the next morning, another passenger on the flight told the Chicago Tribune. In one video, the passenger in question can be seen returning to the plane after the altercation with a bloody face.

Merriam-Webster also noted that United Airlines "used overbook adjectivally to modify a noun, a definition that we don’t yet include." This, the dictionary wrote, is an example of language evolving over time, as "specialized words that are frequently used within an industry sometimes undergo functional shift."

"We volunteer to watch this one," the dictionary quipped in closing.