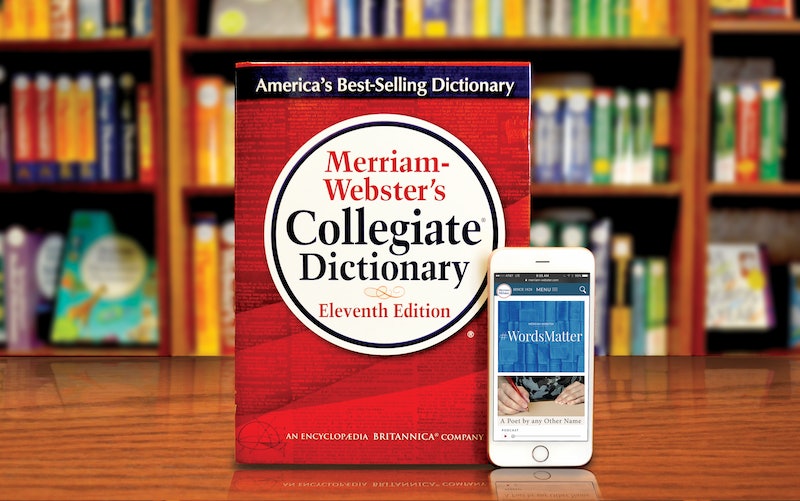 Late on Sunday evening, following the decisions of Oxford Dictionaries and Dictionary.com, Merriam-Webster's 2018 word of the year was revealed to be "justice." Peter Sokolowski, Merriam-Webster's editor-at-large, told The Associated Press that the word wasn't inspired by one specific instance; rather, it rose through the ranks by a thousand smaller moments. And when you think about how many types of "justice" were explored, challenged, and defended over the last year in this country, it seems like a pretty fitting word to define 2018.

Sokolowski told The Associated Press that searches for "justice" on the site were up 74 percent in the last year, which contributed to its selection. In order for a word to be in contention for the honor, he said, it has to reflect a high volume of traffic as well as a notable increase in said traffic from the year before.

Sokolowski said to The Associated Press, “We are not editorializing. We looked at our data and we were ourselves surprised by this word. This is a word that people have been thinking about for this entire year.”

As for Dictionary.com and Oxford Dictionaries, they selected "misinformation" and "toxic" to be their words of the year, respectively.

The official statement by Merriam-Webster read in part,

The concept of justice was at the center of many of our national debates in the past year: racial justice, social justice, criminal justice, economic justice. In any conversation about these topics, the question of just what exactly we mean when we use the term justice is relevant, and part of the discussion.

The statement further pointed out that the word had varying roles in mainstream media throughout the year, from the Mueller Investigation (being cared out by the Justice Department), to the Kavanaugh confirmation, in which the federal judge was vying to become a literal justice.

As for the other dictionary sites, each word was selected in a similarly painstaking fashion. In its official statement on choosing "toxic," Oxford Dictionary explained its decision in a video (as seen above) that said, "More than ever, people have been using 'toxic' to describe a vast array of things, situations, concerns, and events." Oxford Dictionary further described the wide array of uses for the word, from its literal use within environmental activism, to its metaphorical use in the area of psychology (i.e. "a toxic relationship," or "toxic masculinity").

As for Dictionary.com, "misinformation" was chosen as a more pointed effort by the institution to combat the definition of the very word. The official statement read in part, "As a dictionary, we believe understanding the concept is vital to identifying misinformation in the wild, and ultimately curbing its impact."

Though it would be impossible to fully encapsulate the events of a year within a few words, the three words of the year certainly act as a barometer for what the American people are thinking about and interested in.