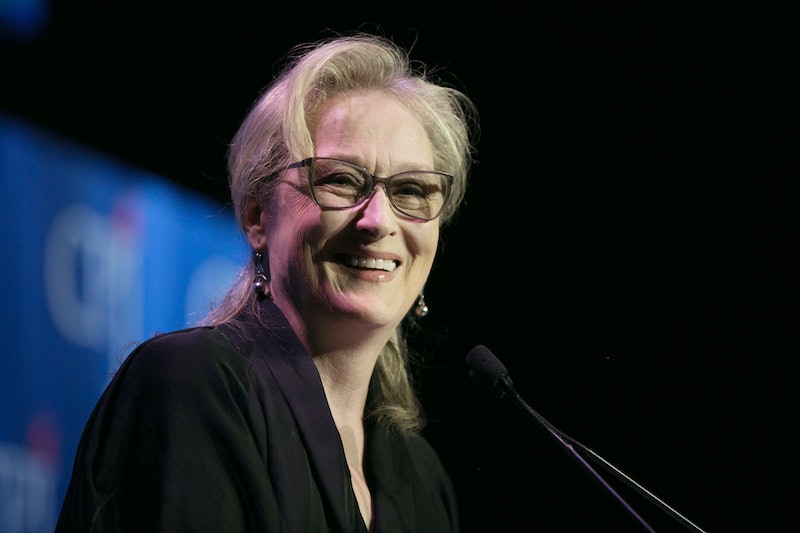 On Monday, Dec. 18, The Huffington Post reported that Meryl Streep has responded to Rose McGowan's criticism of the 2018 Golden Globes protest, in which several actors plan to wear black. In a statement issued to The Huffington Post by Streep's publicist, Leslee Dart, the Oscar-winning actor said:

It hurt to be attacked by Rose McGowan in banner headlines this weekend, but I want to let her know I did not know about Weinstein’s crimes, not in the '90s when he attacked her, or through subsequent decades when he proceeded to attack others.

I don’t know where Harvey lives, nor has he ever been to my home.

I have never in my life been invited to his hotel room.

I have been to his office once, for a meeting with Wes Craven for “Music of the Heart” in 1998.

HW distributed movies I made with other people.

HW was not a filmmaker; he was often a producer, primarily a marketer of films made by other people- some of them great, some not great. But not every actor, actress, and director who made films that HW distributed knew he abused women, or that he raped Rose in the 90s, other women before and others after, until they told us. We did not know that women’s silence was purchased by him and his enablers.

HW needed us not to know this, because our association with him bought him credibility, an ability to lure young, aspiring women into circumstances where they would be hurt.

He needed me much more than I needed him and he made sure I didn’t know. Apparently he hired ex Mossad operators to protect this information from becoming public. Rose and the scores of other victims of these powerful, moneyed, ruthless men face an adversary for whom Winning, at any and all costs, is the only acceptable outcome. That’s why a legal defense fund for victims is currently being assembled to which hundreds of good hearted people in our business will contribute, to bring down the bastards, and help victims fight this scourge within.

Rose assumed and broadcast something untrue about me, and I wanted to let her know the truth. Through friends who know her, I got my home phone number to her the minute I read the headlines. I sat by that phone all day yesterday and this morning, hoping to express both my deep respect for her and others’ bravery in exposing the monsters among us, and my sympathy for the untold, ongoing pain she suffers. No one can bring back what entitled bosses like Bill O’Reilly, Roger Ailes, and HW took from the women who endured attacks on their bodies and their ability to make a living.. And I hoped that she would give me a hearing. She did not, but I hope she reads this.

I am truly sorry she sees me as an adversary, because we are both, together with all the women in our business, standing in defiance of the same implacable foe: a status quo that wants so badly to return to the bad old days, the old ways where women were used, abused and refused entry into the decision-making, top levels of the industry. That’s where the cover-ups convene. Those rooms must be disinfected, and integrated, before anything even begins to change.”

Bustle has reached out to McGowan's reps for comment on Streep's statement, but has not yet received a response. a tweet that has since been deleted, McGowan had voiced her opinion about a rumored 2018 Golden Globes protest; People reported on Dec. 14 that many actors plan to wear black to the awards show to protest sexual harassment.

“Actresses, like Meryl Streep, who happily worked for The Pig Monster, are wearing black @goldenglobes in a silent protest. YOUR SILENCE is THE problem. You’ll accept a fake award breathlessly & affect no real chance. I despise your hypocrisy. Maybe you should all wear Marchesa.”

Marchesa is the clothing brand that was founded by Weinstein's wife, Georgina Chapman. On Dec. 18, McGowan tweeted an apology for the final line of the tweet, which included Champman's clothing line. "The Marchesa line was beneath me and I’m sorry for that," the actor said in the tweet. "There is no map for this road I’m on..."

Streep is currently starring in The Post, which is nominated for six Golden Globes, including Best Actress in a Drama for the Oscar winner. McGowan has been an important and outspoken voice throughout the #MeToo movement and is among the Silence Breakers who were named as Time magazine's Person of the Year.

More like this
Beyoncé & Madonna’s “Break My Soul” Remix Honors A Group Of Black Icons
By Stephanie Topacio Long
Gassed Up Promises All Things Action, Risk, & Redemption
By Frances Stewart
'The Capture' Is Finally Back – & S2 Looks Tense AF
By Sophie McEvoy and El Hunt
The Lionesses Are Calling For Equal Access To Football In Schools
By Sophie McEvoy
Get Even More From Bustle — Sign Up For The Newsletter