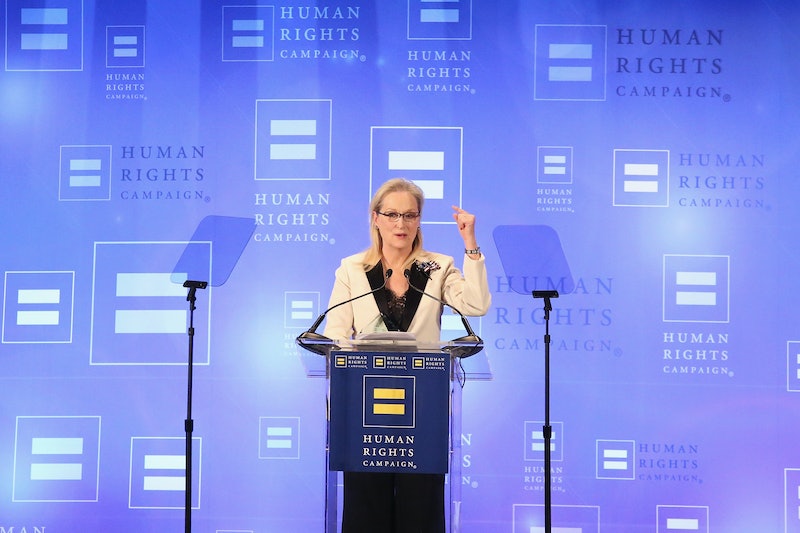 One of the so-called "most over-rated actresses in Hollywood" has served up harsh criticism of President Donald Trump, again. In an impassioned speech at a fundraising dinner for the Human Rights Campaign, Academy Award-winning actress actress Meryl Streep denounced both Trump's behavior and policies Saturday in a biting rebuke of the president that never mentioned him by name. But while she was firm in her condemnation of the president, Streep said America may have at least one reason to thank President Trump.

In a speech at a New York gala for the Human Rights Campaign, a nonprofit LGBTQ civil rights advocacy group Streep said, "If we live through this precarious moment, if his catastrophic instinct to retaliate doesn't lead us to nuclear winter, we will have much to thank this president for because he will have woken us up to how fragile freedom really is."

It was Streep's first time speaking publicly about the president since he attacked her on Twitter for criticizing him in her acceptance speech at the Golden Globes in January. "Meryl Streep, one of the most over-rated actresses in Hollywood, doesn't know me but attacked last night at the Golden Globes," Trump tweeted a day after Streep rebuked him for mocking Serge Kovaleski, a New York Times reporter with a medical condition that causes joint contracture in one of his hands and arms. "She is a Hillary flunky who lost big."

"Yes, I am the most overrated, over-decorated, and currently, over-berated actress … of my generation," Streep said Saturday, acknowledging Trump's criticism of her. "But that is why you invited me here! Right?"

Streep went on to comment on the Trump administration's contributions to the country's current political climate. "The whip of the executive can, through a Twitter feed, lash and intimidate, punish and humiliate, delegitimize the press and imagined enemies with spasmodic regularity and easily provoked predictability," Streep said.

Streep emphasized the importance of political activism under the current administration, saying activism efforts no matter how small were needed now more than ever. "Evil prospers when good men do nothing," Streep said, borrowing a quote often attributed to both philosopher Edmund Burke and Irish politician John Philpot Curran.

"We're not going to go back to the bad old days of ignorance and oppression and hiding who we are," she said. "We owe it to the people who have died for our rights, and who have died before they even got their own."