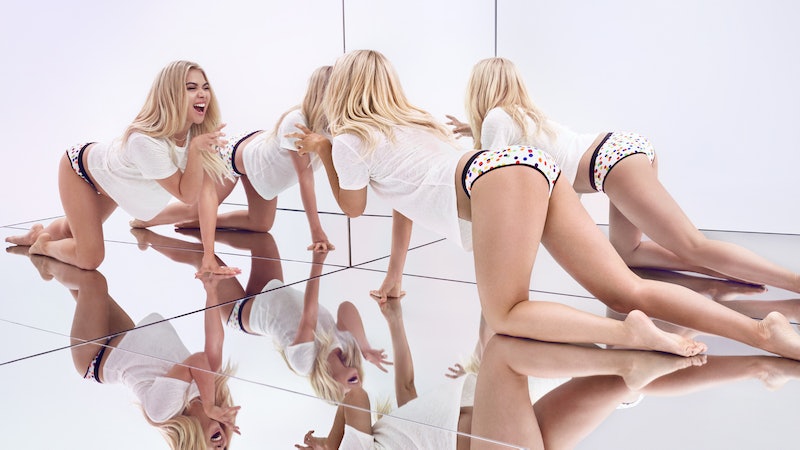 Just ahead of the 2017 L.A. PRIDE Parade & Festival (as well as many other PRIDE celebrations across the globe) kicking off in June, MeUndies' "Celebrate Yourself" campaign is encouraging everyone to do just that with a special collection of colorful polka dot underwear in partnership with the Los Angeles LGBT Center.

The brand's first PRIDE campaign features influencers including actress and singer Hayley Kiyoko and Olympic skier Gus Kenworthy modeling the undies in mirrored room to send a message of self-acceptance and diversity. Other people in the campaign include musician and TV personality Big Freedia, blogger and YouTube host B Scott, and vloggers and YouTubers Stevie Boebi and Ally Hills.

Even though the undies themselves are unique, expressive, and totally fun, there's a bigger reason to order a few of the styles. For each pair of Celebrate undies sold, MeUndies will donate $1 to the Los Angeles LGBT Center. So not only will you have a cute new pair of underwear to add to your rotation, but you'll also be helping the center bring recognition and awareness to The Equality Act, fight against anti-trans bathroom laws, and bring awareness to Trump's anti-LGBT army secretary nominee. And doing what you can to fight the good fight is absolutely worth celebrating.

Here's a look at a couple of images from the campaign featuring the undies, and in this case, Kenworthy.

Kiyoko makes a fun appearance, too.

There are four men's styles to choose from, but here's a look at the four women's styles.

These are super soft and stretchy — perfect pajama undies, IMO.

One of the classics (with a fun pattern).

Definitely more colorful than those black boyshorts you've had forever.

Not reccomended under white pants — but still so cute.

More like this
Google Wants You To Shop Black-Owned The Friday After Thanksgiving
By Dominique Norman
Kim Kardashian Fans Are Calling On Her To Condemn Balenciaga’s Latest Campaign
By El Hunt
The Best Heels For Bunions, According To A Podiatrist
By Margeaux Baulch Klein and Maria Cassano
Cyber Monday 2022 Is Around The Corner. Here Are The Deals To Expect
By Dominique Norman
Get Even More From Bustle — Sign Up For The Newsletter