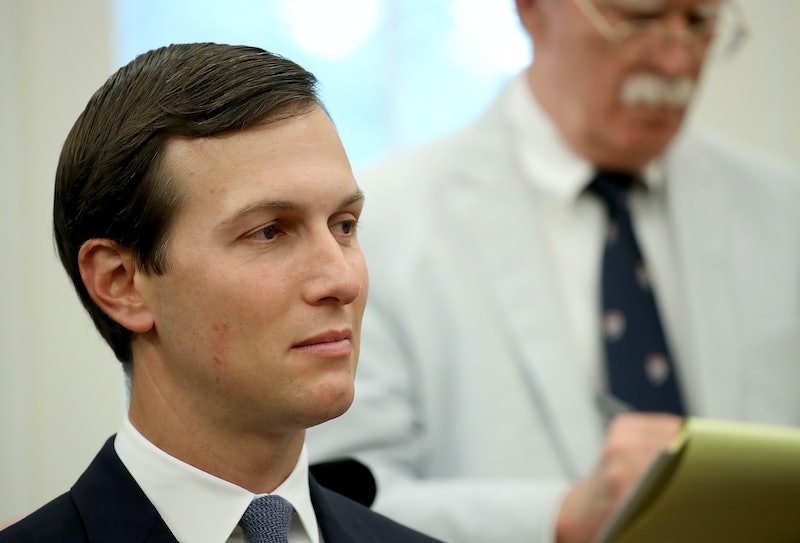 One of Trump's White House aides is receiving a particularly important honor this week. The president of Mexico is awarding Jared Kushner the Order of the Aztec Eagle this Thursday at the G20 summit in Argentina. The award is the highest honor Mexico can bestow to a foreigner. And for those who are confused about why Kushner of all people would be given the award, the reason has to do with his work on initiating the North American Free Trade Agreement.

The statement on the award reads,

Mr. Kushner's participation was a determinant factor to start the process of renegotiation of [the North American Free Trade Agreement], avoiding a unilateral exit by the United States from said treaty, and his constant and effective involvement was key in achieving a successful close of negotiations.

This award is a big deal for more than the obvious honor that Kushner is receiving: it's also President Nieto's last major act as president before President-elect Andrés Manuel López Obrador takes over on Saturday. After receiving the Aztec Eagle, Kushner will join a group of eclectic and impressive former recipients, all of whom have received the award in the past: Walt Disney, Fidel Castro, Bill and Melinda Gates, and former Sen. Ted Kennedy, to name a few.

Kushner has not yet made a public statement on the reported honor.

Though it was once known as the North American Free Trade Agreement, the pact was renegotiated (through Kushner's efforts) last year and was renamed the U.S.-Mexico-Canada Agreement (USMCA).

According to The State, Kushner's honor was met with widespread criticism in Mexico on Tuesday. Enrique Krauze, a prominent thinker in Mexico, called the decision an act of "supreme humiliation and cowardice."

Krauze tweeted, "Kushner is the son-in-law of the man who called Mexicans 'killers and rapists.'"

Kushner first became the "point person" for Trump with U.S.-Mexican affairs at the beginning of Trump's presidency, according to CNN. Kushner reportedly worked to leverage relationships with Luis Videgaray, the Mexican foreign secretary, and advisors to Justin Trudeau in the weeks leading up to the agreement.

The USMCA still hasn't been signed, though: in fact, it's scheduled to be signed by the leaders of the U.S., Mexico, and Canada during the G20 summit this week. What's more, the agreement still needs approval by Congress.

There's another slight hiccup in the progression of the USMCA: there has not been a finalization on the text of the agreement yet. Here's what that means: prior to a signing ceremony, all parties need to agree upon what they're saying, and in order for that to happen, each country needs to publish its own version of the text. However, Canada still has not published its own version of the text, so francophones are currently unable to read the text in their first language.

POTUS has not yet commented on the honor bestowed upon Kushner. Neither has his wife, Ivanka. It's unclear at what point during the summit the award ceremony will take place.