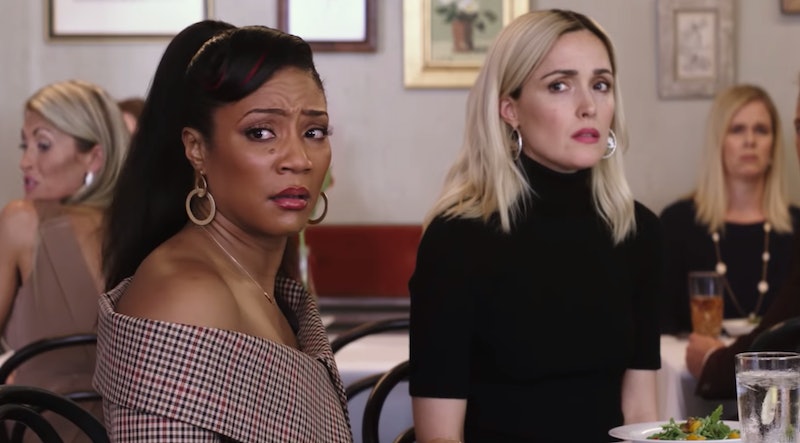 Who among us — after one too many glasses of wine or just a really fun hang with a friend — hasn’t thought, we should totally go into business with our bestie? And while that might seem like a great idea, just watch Like a Boss (in theaters Jan. 10) for a reality check. The film follows best friends, Mel (Rose Byrne) and Mia (Tiffany Haddish). The two are struggling to keep their business, Mia & Mel, which isn't based on a real company, afloat. Because despite the brand’s popularity, the duo have wound up with nearly half a million dollars in debt.

To help get their finances back on track, they enlist the help of Claire Luna (Salma Hayek), a famous makeup magnate and angel investor, who agrees to pay off their debts in return for a 51% stake in the business. Luna is hands-on with Mia and Mel, for better or worse. She makes cutthroat demands of the founders in the name of teaching them how to "be a boss." Demands like forcing them to fire their friend and colleague, Barrett (Billy Porter), for no apparent reason.

While Like A Boss' story of BFFs turned business partners isn’t based a true story, there are many real-life companies run by similar pairs. In 2013, Forbes profiled a series of best friend entrepreneur duos, with many of them recounting trajectories much like Mel and Mia's. Like Stacy Struminger, co-founder of a fashion brand, who told Forbes: "[Rachel Teyssier, co-founder and business partner’s] my best friend, and we talk 20 times a day! With her motivation, we started moving on it the next day."

And as in Like a Boss, many of these women have also faced hardships while growing their companies. In the same feature, Shante Bacon explained how she and her co-founder of their PR company, Saptosa Foster, liquidated their savings to stay in business one year. "We were trapped in a cycle of pitching, pitching, pitching—with no success," Bacon shared with Forbes. While Bacon and Foster’s story is less theatrical, and doesn't include a bailout from a maniacal angel investor like Mel and Mia's, they also fought tooth and nail to save their business (which they still run today).

Since Like a Boss is a work of fiction, it also contains many over-the-top hijinks not as common in the business world. Byrne and Haddish are masters of physical comedy, so when their characters learn that Luna is out to steal their ideas, the film turns into an all-out war against her, with stunts and slapstick moments aplenty. But at its core, it’s the story of two women fighting to save their business and friendship, at all costs. And what’s more relatable than that?