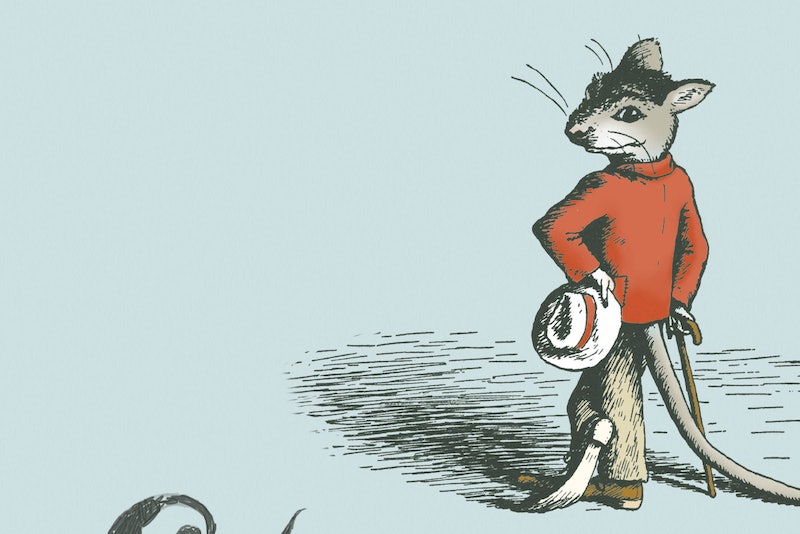 While watching An American Tail this past weekend (as you do), and weeping openly over the exploits of young Fievel Mousekewitz and his mouse family, I hit upon a strange realization: the literature of my childhood was full of mice. I mean, yes, in part this was because I read animal books fanatically as a child. But I sought out all those books about horses and warrior cats. I actively tried to find every possible book concerning wolves and dragons. I don't remember going out of my way to find books about mice, and yet every other book I read seemed to star a brave little protagonist of the order Rodentia. The number of mice in popular kids' books during the '80s and '90s was rivaled only by the number of duck-based TV shows on the Disney Channel. So I have come here today to ask simply: Why? Why so many mice?

Now, to be clear, I like mice and rats. I had four pet rats over the course of high school (Basil, Theodore Roosevelt, Gogo, and Didi). As a child, though, I don't remember anyone being "into" mice, they way they would be "into" horses or dolphins or dinosaurs. Mice weren't a specialized interest. Rather, the mouse seemed to be universal. Mouse stories were rarely about a brave little girl befriending a wild, majestic mouse, or about a farm boy and his loyal mouse companion. The mice in these stories were more like small, furry stand-ins for the small, non-furry child readers.

Mice are often the unlikely heroes of their own stories, like Stuart Little, Ralph S. Mouse, or even Mickey. Or if not, then they're the cheerful little helpers like in Cinderella. Or they're the wily, clever creatures who can outsmart their much larger (often feline) enemies, like in the fables of Aesop or the stories of Beatrix Potter or the diabolical Jerry from Tom and Jerry. Rats are sometimes scary animals, even in the cutesiest of kids' books, but mice are always tiny people. They're like living toys, with their fur and their matchbox beds. I can't think of too many literary mice who aren't anthropomorphic in one way or another.

In her book Animal Land, about the animals of children's literature, Margaret Blount points out that mice appeal to kids because they are small, furry, and secretive. Kids know what it's like to be small and helpless in a big, big world. Plus, it's fun to imagine that mice must have a whole mirror universe of tiny things in their secret mouse-houses: tiny clothes and tiny walnut beds and, in certain cases, tiny swords and/or motorcycles. And we can assume that mice are brave, because they live so awfully close to big people:

"When mice are not populating a mirror world, sheer charm and smallness take over — the small size often being allied to courage and resourcefulness. Mice are useful characters who, if you have a doll’s house, will come and inhabit it for you. At its most crude, the small character is the one who is forever outwitting the larger one, as in Tom and Jerry. More delicately, mice will become actors in tales where miniature life is enjoyed for its own sake. Some, feeling the pleasure of this idea, have used miniature humans for the purpose (The Borrowers, Mistress Masham’s Repose) or invented a different species (Wombles, and rather larger, Hobbits)."

Of course, a lot of these mouse books were penned well before the '90s. But as a kid, I still read E.B. White's Stuart Little, where the titular mouse had to struggle with being too-small in a too-big world (and also there was the sheer body horror that his human mother apparently just gave birth to a living mouse in defiance of all known medical science).

I also read The Mouse and the Motorcycle, the Beverly Cleary book about the cool, hog-riding little mouse, which was made into a deeply unsettling film. That one was sort of a story about a boy and his mouse, but the Ralph S. Mouse was still the diminutive hero who got the sweet, sweet ride. And then of course there was Anatole and Abel's Island and The Rescuers and Basil of Baker Street and Ben and Me and If You Give a Mouse a Cookie.

The mouse books that I remember best, though, are the books about brave mice on perilous quests. Mrs. Frisby and the Rats of NIMH by Robert C. O'Brien told the tale of a widowed mouse trying to win the favor of some unnaturally intelligent rats in order to save her children from certain death. Poppy by Avi was all about a little mouse overthrowing the tyrannical owl who murdered her boyfriend. Redwall and its sequels by Brian Jacques followed a whole society of mouse monks and rat warlords. The Tale of Despereaux by Kate DiCamillo featured a brave mouse who must rescue a princess in a violent world of rats and child abuse. The Dark Portal by Robin Jarvis dealt with mice fighting an evil god of darkness deep in the sewers.

These books didn't pull any punches. They were cute, sure, because mice are cute (at least until they run across your feet in a darkened alleyway). But they were also dark. The mice were small, and yet they were up against the forces of evil. They were always overpowered and outnumbered. And yet they always prevailed. In fact, they usually managed to use their small size and their extra smarts to defeat the owls or cats or rats. They won because everyone underestimated them.

And when you're a little kid in an awfully big world, it makes perfect sense to gravitate towards these sorts of stories. We weren't afraid of darkness, as long as the little guys made it out alive. We wanted to see tiny, cutesy creatures proving their meddle. We wanted to feel like we had power, not just in spite of our small size but because of it.

Also there's just something pretty dang awesome about a little mouse who can kick major ass.