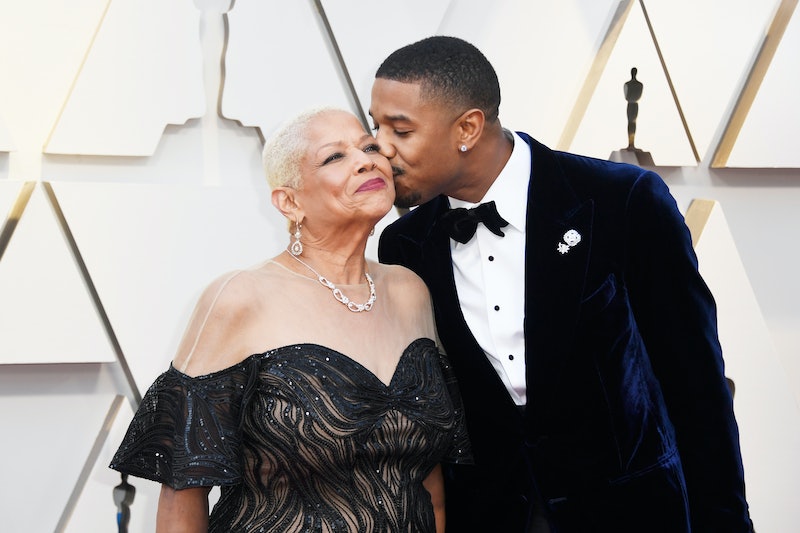 Awards come and go, but family is forever. Michael B. Jordan brought his mom to the 2019 Oscars as his date, and it's the kind of gentlemanly move that makes the hearts of fans melt everywhere. Jordan, who starred in Best Picture nominee Black Panther, shared a photo of his date before they made their way to the red carpet.

While it might be surprising to see Jordan walking the red carpet with his mom and not, say, a super model, or his Black Panther co-star Lupita Nyong'o, it really shouldn't be. As recently as February of 2018, the actor was living with his parents — or, as he tweeted on Feb. 22, 2018, "they live with ME." In November of 2018, he told Us Weekly, "The best part of living with my family I want to say [is] home-cooked meals." He specifically called out his mother's cooking, saying, "I think being able to come home and have my mom be able to cook some home-cooked food is pretty cool."

It sounds only right, then, that Donna would be his first choice to accompany him to Hollywood's biggest night. And Jordan and his mother, Donna Jordan, make quite the striking pair. In the photo he shared to Instagram, Jordan's mother is absolutely beaming with pride as her son smiles. But it's the caption that really makes it: "My mama about to make me have to fight somebody she looking so pretty.❤️❤️❤️ #Oscars2019 #PopsIGotYou #DateNight." And the love fest only continued.

The actor also shared a video of the two on their way to the awards, where he surprised his mother by turning on the camera while they were in the car. "You know what it is," he said, before turning the camera onto his mom, who is none the wiser. "I was talking about the video that you're on right now," he added. Donna is a good sport, laughing at her son's antics.

This isn't the first time Jordan has put his mom in the spotlight. Donna had a small cameo appearance in the actor's 73 Questions video for Vogue. In the video, he described his mother as "loving, embarrassing (sometimes) and nurturing." And last year, the mother-son pair walked down the red carpet of the NAACP Image Awards together on Jan. 15, 2018.

Like any good son would, Jordan posed for incredibly cute photos with his mom on the red carpet, but he also took the time to join his Black Panther cast mates before the big event. Jordan, of course, starred in the groundbreaking Marvel film as Killmonger, a role many believed should have earned him an Oscar nomination for Best Supporting Actor.

After the release of Black Panther in February of 2018, Jordan's Killmonger became somewhat of an Internet sensation, specifically, a meme thanks to his iconic line "Is this your king?" Well, tonight, Jordan brought his mother as his date to the 2019 Oscars, so, if you ask if he's your king, the answer is yes.