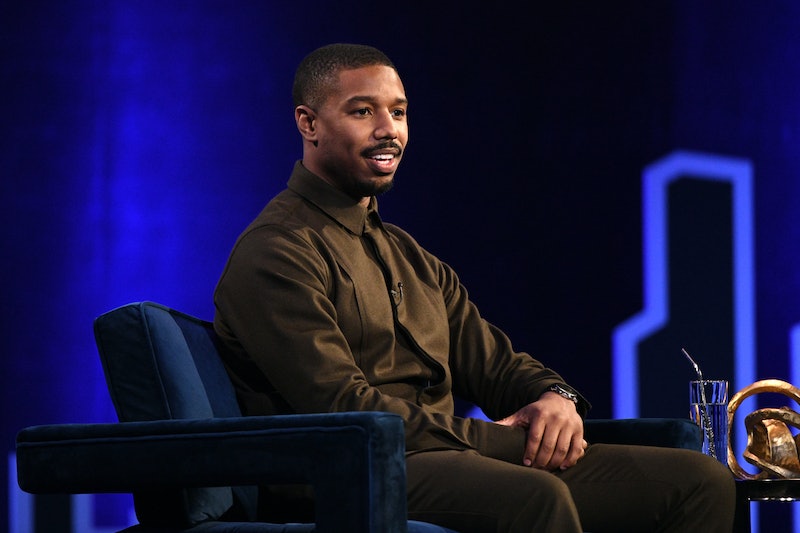 On the outside, Black Panther villain Erik Killmonger may have seemed like an amazing and fun character to play, but for actor Michael B. Jordan, it proved to be a lot more intense than fans realized. In fact, People reported that during Tuesday’s taping of Oprah Winfrey's SuperSoul Conversations TV special in New York City, Jordan revealed that he went to therapy after Black Panther had wrapped, and his comments on the experience will make you love and respect the actor even more (if that was even possible).

“I started talking to people, starting unpacking a little bit,” he revealed to Winfrey, who inquired how he was able to get into the mindset and really capture the nastiness necessary to bring such a powerful villain to the big screen. The answer, it turns out, is that he cut himself off from a lot of people during filming. “I was by myself, isolating myself … I spent a lot of time alone," he explained. “I figured Erik [Killmonger], his childhood growing up was pretty lonely. He didn’t have a lot of people he could talk to about this place called Wakanda that didn’t exist.”

And it was that type of mindset that Jordan had a difficult time coming out of after the movie was done shooting. “I think just being in that kind of mind state … it caught up with me,” he added. “It was a little tough for me at first … Readjusting to people caring about me, getting that love that I shut out."

As Jordan told Winfrey, it was then that the actor decided to seek professional help so he could come out of the darkness Killmonger had created. “Honestly, therapy, just talking to somebody just helped me out a lot," Jordan stated. "As a man you get a lot of slack for it … I don’t really subscribe to that. Everyone needs to unpack and talk.”

The topic of mental health and mental illness remain somewhat controversial even today, so the fact that Jordan is drawing attention to the importance of seeking help when needed is commendable and a testament to his character. It also further demonstrates just how deep Jordan goes into his roles.

Back in May 2018, he revealed on The Late Show With Stephen Colbert that he kept a Killmonger diary to help him better prepare for the part. "I write journals for every character that I have, from the earliest memory up until the first page of the script. For me, it just kind of gives you context," Jordan said to Colbert at the time. "For [Killmonger], his was particularly dark. It was a very sad journal, not having his mom growing up, [being] in and out of the system [in] foster care, foster homes and whatnot."

Thankfully, therapy was able to help Jordan ultimately get out of that dark mindset. So while he may have played a villain in the movie, he's proven to be quite the role model and hero in real life.