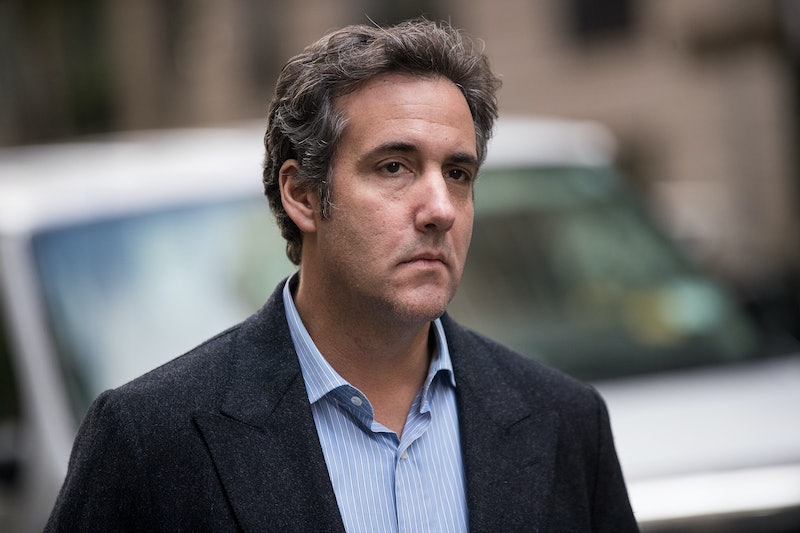 President Trump's attorney and fixer has been notably out of the news lately, ever since the FBI raided his office and hotel room in a move that shocked the president. Monday morning, he finally spoke out — and Trump probably isn't going to like what he had to say. In an interview on Good Morning America, Michael Cohen revealed that Trump isn't his top priority anymore.

“My wife, my daughter and my son have my first loyalty and always will,” Cohen told ABC's George Stephanopoulos. “I put family and country first.”

During a long interview with Cohen, Stephanopoulos had ample opportunity to ask about the subject that's been on observers' minds for months — is there any chance that Cohen could flip and start cooperating with Robert Mueller's investigation? The New Yorker estimated that Cohen flipping could be very dangerous for Trump, because Cohen had such an intimate knowledge of Trump's business dealings. As Vox pointed out, though, Cohen had previously made it clear that he was 100 percent on Team Trump, even saying that he was "the guy who would take a bullet for the president."

In his interview on Good Morning America, though, Cohen strongly suggested that his viewpoint had shifted.

"When I asked Cohen directly what he would do if prosecutors forced him to choose between protecting the president and protecting his family, he said his family is 'my first priority,'" Stephanopoulos wrote about his interview with Cohen. He said that he later pressed the issue, bringing up Cohen's claims that he would "take a bullet" for Trump.

“To be crystal clear, my wife, my daughter and my son, and this country have my first loyalty,” Cohen told Stephanopoulos in response.

Cohen also said that he hadn't yet heard about what sort of legal trouble could be facing him. “Once I understand what charges might be filed against me, if any at all, I will defer to my new counsel, Guy Petrillo, for guidance," he told Stephanopoulos. The decision of whether or not to cooperate with the investigation, if it came to that, would come down to the legal guidance of Petrillo and not any sense of loyalty to the president, Cohen told ABC.

Stephanopoulos also brought up an issue that would almost certainly face Cohen, if he decided to flip — how Cohen would respond if Trump and his team publicly turned on him.

“I will not be a punching bag as part of anyone’s defense strategy,” Cohen told Stephanopoulos. “I am not a villain of this story, and I will not allow others to try to depict me that way.”

Even beyond that, Cohen made it clear that he strongly disagrees with Trump on a number of issues. For example, after Cohen's office was raided, Trump tweeted about the investigation as a whole, calling it "A TOTAL WITCH HUNT!!!" Cohen, in his Good Morning America interview, made it clear that he does not hold a similar view.

“I don’t agree with those who demonize or vilify the FBI. I respect the FBI as an institution, as well as their agents. When they searched my hotel room and my home, it was obviously upsetting to me and my family," Cohen said. "Nonetheless, the agents were respectful, courteous and professional. I thanked them for their service and as they left, we shook hands.”

He also more directly addressed the Russia investigation, and Trump's habit of referring to it as a "witch hunt."

"I don’t like the term witch hunt,” Cohen told ABC. “As an American, I repudiate Russia’s or any other foreign government’s attempt to interfere or meddle in our democratic process, and I would call on all Americans to do the same.”

More than anything else, Cohen made it clear to Stephanopoulos that he still had a story to tell — and as the investigation continues, the public is likely to learn more and more about it.