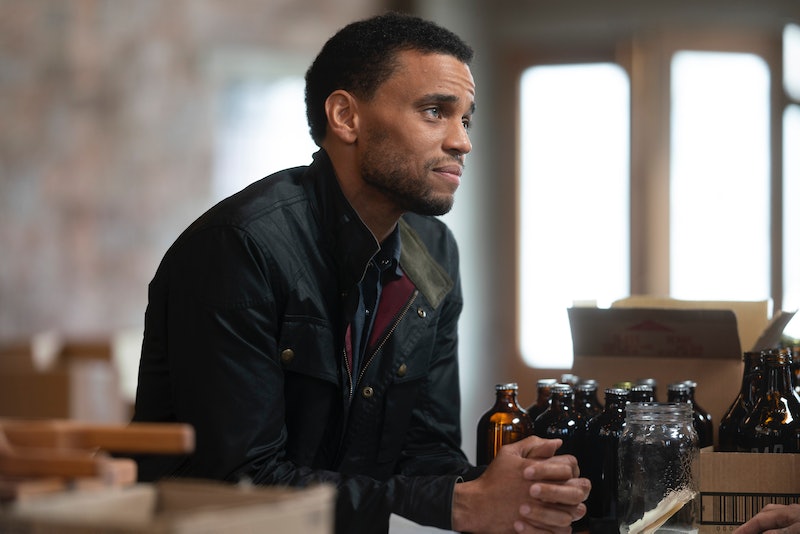 Stumptown, the primetime crime drama, based on the graphic novels of the same name, follows a quick-witted military vet named Dex (Cobie Smulders) who decides to become a private investigator while simultaneously taking care of her brother in Portland, Oregon. Smulders will be joined by a fantastic group of actors, including Michael Ealy, who plays Detective Miles Hoffman on Stumptown.

Miles is a Portland Police vet who forms an instant connection with Dex as soon as their paths cross. But while many viewers might be expecting to see a love affair blossom between the two characters, Ealy told Rolling Out that it's "more of a vibe than a conventional romantic relationship." Miles won't just have his adventures with Dex to focus on, either. According to Ealy, his character has a few skeletons in his closet, one of which comes back to haunt him this season.

"We just shot [a scene] on Friday. Basically, my character has a nemesis from his past and I'm forced to confront that particular character in this particular episode. So, that was emotionally draining," he shared in an interview with Wonderwall.com.

The role of Miles was one that Ealy was keen to take on, having admitted that he believed the character had been "underwritten in the pilot," giving him an opportunity to really transform the role and make it his own. In fact, Ealy loved everything about Stumptown, from the music used on screen to the show's unique approach to storytelling.

"The show's got a lot of heart. It's got the best soundtrack in the history of television," he explained in the same Wonderwall interview. "Cobie's character, Dex, she's got this ability to feel relatable to everyone. She's kind of scrappy. She's crafty. It's not about shooting people and stuff like that. It's not James Bond. She kind of does it her way. She's very resourceful, which is much more interesting, I think."

It's the unconventional character of Dex that Ealy seems truly in awe of, according to Entertainment Weekly. He said at the show's premiere event, "We don’t present the female lead as a catch that is looking for love. We go in the polar opposite way of that." Smulders agrees that she was drawn to the role because it was well-rounded.

She said at the same premiere panel event, "We meet her and she’s at this point of her life where she doesn’t have any direction and is facing some major things, such as PTSD and addictions, which I think takes an enormous amount of strength, and she does it bravely. I’m just excited to be on an adventure and stay with this character and watch her evolve over time.” Hopefully, that also includes nurturing that "vibe" between her and Ealy.

In addition to Ealy and Smulders, the Stumptown cast includes plenty of other recognizable faces like Camryn Manheim (The Practice, Person of Interest) and Jake Johnson (New Girl) to less familiar but equally as talented actors like Robb Derringer (Days of Our Lives) and Tantoo Cardinal (Frontier, Outlander). Fans will just have to tune

More like this
Michael B. Jordan Tackled His "Public Breakup" With Lori Harvey On 'SNL'
By Brad Witter
Every 'That '70s Show' Character Who Returned For The Netflix Spinoff
By Grace Wehniainen
Pamela Anderson's Sons Brandon & Dylan Have Their Own Hollywood Careers
By Arya Roshanian
Ashton Kutcher Wants Danny Masterson “To Be Found Innocent” In Rape Retrial
By Jake Viswanath
Get Even More From Bustle — Sign Up For The Newsletter
From hair trends to relationship advice, our daily newsletter has everything you need to sound like a person who’s on TikTok, even if you aren’t.