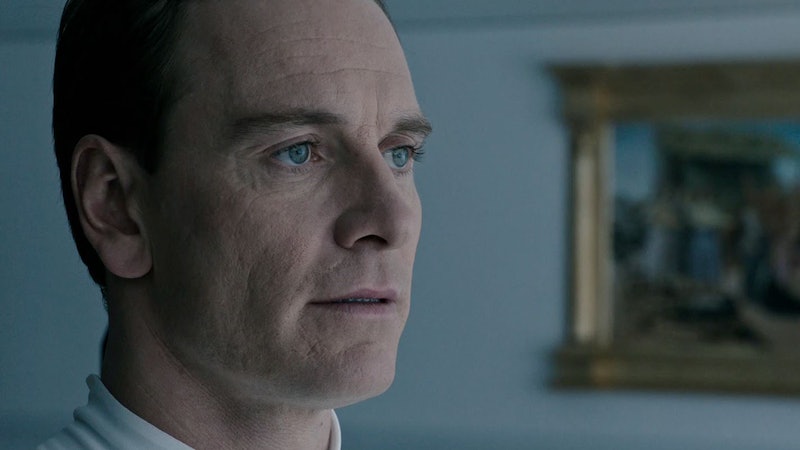 What's better than one Michael Fassbender in a movie? Two Michael Fassbenders in a movie, as shown by Alien: Covenant. In the new film, the actor plays the roles of David and Walter, twin androids who look identical, but have different make-ups and backgrounds; David is a former crew member of the ship in Prometheus, while Walter is a new, less human-like creation made for the Covenant. Scenes featuring the two Fassbenders are, naturally, a lot of fun to watch — especially the one where one Fassbender sexually plays the recorder, an Alien: Covenant twist even diehard fans likely wouldn't have seen coming.

First, some context: in the movie, the Covenant team, including Walter, lands on an unexplored planet, and soon, several crew members become infected by a deadly alien creature. As the team struggles to survive, they encounter David, who's lived on the planet since the Prometheus ship crashed. He tells them that the aliens were accidentally released by his ship, killing the planet's native population, but (spoiler alert) it's discovered later that he's lying and is actually protecting the terrifying creatures in order to breed them with humans. It's all kinds of creepy and gross, yet the only people who become aware of David's evil plans end up dead pretty soon after finding out.

As this is all happening, David and Walter start to bond a bit, as they're basically twin brothers, with a few core changes. They talk, play piano, and —in a scene fans are unlikely to forget anytime soon — David teaches Walter how to play the recorder, saying he'll help him with the "fingering." It's an oddly sexual scene that seems like it's supposed to be taken seriously, but judging from the laughs heard from my screening's audience, at least, many viewers will find it a lot more amusing than dramatic. I mean, it's Michael Fassbender tenderly and very intimately teaching another Michael Fassbender how to play the recorder. What's not to love?

This scene is so weird, you guys, and it's not even the strangest part of the double Fassbender situation in Covenant; in another scene, the two Fassys actually kiss, for a very brief but very confusing moment. Are David and Walter supposed to be into each other? Is David just the kind of guy who makes every situation sexual, no matter what? Who knows, man. Alien: Covenant is a strange, strange movie.

But hey, who can complain about getting two Fassbenders in one movie? Thank you, Alien: Covenant, for providing fans with this odd but lovely gift.

More like this
Michael & Kathleen Peterson’s House From ‘The Staircase’ Has New Owners
By Kadin Burnett and Kayla Blanton
The 'Hocus Pocus' Sequel Finally Has A Release Date & It Makes Total Sense
By Shannon Barbour and Radhika Menon
Watch The Dramatic First Trailer For Netflix's Jennifer Lopez Documentary
By Alyssa Lapid
What Does Doctor Strange’s Third Eye Mean?
By Arya Roshanian
Get Even More From Bustle — Sign Up For The Newsletter