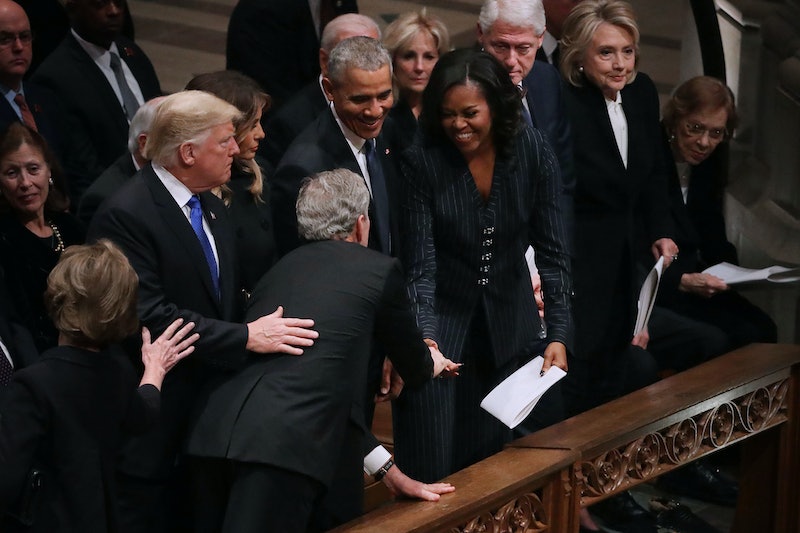 People seem to adore the bond between Michelle Obama and her husband's predecessor. Over the weekend the former first lady revealed a bit more about what's become something of a tradition for the two of them: Obama explained her and George W. Bush's mint-passing moment while on tour to promote her new memoir, Becoming.

The duo's candy-pass became a viral sensation after Bush was seen giving Obama mints at both Sen. John McCain's and George H.W. Bush's funerals in September and December, respectively.

"[Bush] has the presence of mind and the sense of humor to bring me a mint, and he made it a point to give me that mint right then and there and that’s the beauty of George Bush," Obama said while speaking at the SAP Center in San Jose, California.

An ABC News clip showed Bush greeting various former presidents and first ladies, including Donald and Melania Trump, Michelle and Barack Obama, Bill and Hillary Clinton, and Jimmy and Rosalynn Carter, at his father's funeral service at the National Cathedral. As he shook hands with the Obamas, Bush could be seen sneaking something to the former first lady, which elicited a warm smile from her.

It didn't take long for that particular moment to go viral on Twitter, since it recalled a similar exchange between the two at McCain's funeral. "Candy is the secret to bipartisanship," political scientist and writer Ian Bremmer mused on Twitter in response to the clip.

Obama has a hunch as to why people are such huge fans of her friendship with the 41st president. In November, the former first lady shared her thoughts about Bush with his daughter Jenna Bush Hager, a contributor for NBC's Today. Hager asked if Obama knew why people seemed "hungry" for the dynamic between Obama and her father.

"Because I think the political discourse, the way it’s shown in the media, is … all the nasty parts of it," Obama replied. "You know? Because I guess we’ve become a culture where the nasty sells. So people are just going to keep feeding that."

"We’re all Americans," Obama added. "We all care about our family and our kids, and we’re trying to get ahead. And that’s how I feel about your father. You know? He’s a beautiful, funny, kind, sweet man."

Hager also brought up a popular 2016 photo of her father and Obama, that shows the former first lady giving the 41st president a hug at the Smithsonian Museum of African-American History and Culture. "I do love that picture," Hager said.

For his part, Bush has also spoken publicly about his fondness for Obama. In 2017, he told People magazine that the former first lady "kind of likes [his] sense of humor." He added, "Anybody who likes my sense of humor, I immediately like."

“I can’t remember where else I’ve sat next to her, but I probably have a few wise cracks and she seemed to like it OK,” he also said. “I needle her a little bit and around her, I’m fairly lighthearted. [The Obamas] are around serious people all the time and we just took to each other.”

More like this
Michelle Obama & Taylor Swift React To The Supreme Court Overturning Roe v. Wade
By K.W. Colyard
Every Single Big & Small Way You Can Fight For Abortion Rights
By Tess Garcia
Police Shove 'Full House' Star Jodie Sweetin At An Abortion Rights Protest
By Radhika Menon
5 Ways To Stand In Solidarity With Women In America From The UK
By Sophie McEvoy
Get Even More From Bustle — Sign Up For The Newsletter