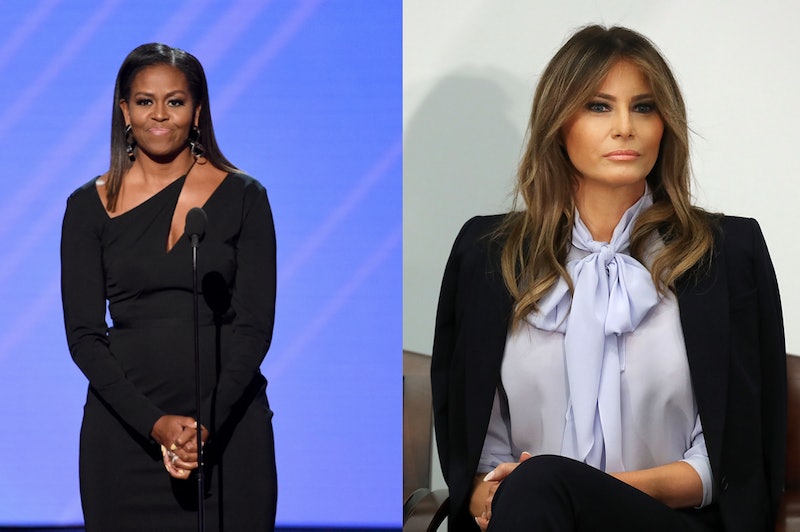 The current first lady recently declared herself "one of" the most bullied people in the world, but her most recent predecessor isn't quite buying it. In an interview with NPR, Michelle Obama responded to Melania Trump's claims about being bullied, and suggested that first ladies should develop a thicker skin when it comes to receiving criticism.

Bustle has reached out to the first lady's office for comment. NPR's Audie Cornish interviewed Obama about her upcoming book release, and asked whether she can relate to the feeling of being bullied more than anybody else on the planet. Obama was crystal clear in her response.

"I can't," Obama replied, according to a transcript. "I can't look around at what's going on and view myself as — I wrote about the fact that, how I learned not to sort of take myself so seriously in this role was when I would meet military families, and spend time on bases, and I would see the sacrifice that these families would make and the hardships that they would bare because they would have a loved one serving and dying and putting their life at risk. I admired them and it made me feel like, 'let me not complain out loud about anything that is happening to me.'"

Melania isn't the only Trump for whom Obama has harsh words. The Washington Post obtained excerpts of Obama's upcoming book Becoming, and in it, the former first lady strongly denounced Donald Trump for regularly stoking rumors that her husband wasn't born in America.

“The whole [birther] thing was crazy and mean-spirited, of course, its underlying bigotry and xenophobia hardly concealed. But it was also dangerous, deliberately meant to stir up the wingnuts and kooks,” Obama wrote. “What if someone with an unstable mind loaded a gun and drove to Washington? What if that person went looking for our girls? Donald Trump, with his loud and reckless innuendos, was putting my family’s safety at risk. And for this I’d never forgive him.”

When asked about that quote on Friday, the president told reporters that "I’ll never forgive [Barack Obama] for what he did to our United States military," though he didn't explain what he meant.

According to the Post, Obama's book is divided into three parts. The first, "Becoming Me," is about the city of Chicago and its various institutions; the second, "Becoming Us," covers her relationship with Barack; and the third, "Becoming More," addresses her and Barack's experiences as public figures.

In both her book and an upcoming interview with ABC News, Obama revealed for the first time that she and Barack suffered a miscarriage before giving birth to their two daughters, Sasha and Malia. She told ABC News that she felt compelled to speak out about her experience so that other women who suffer miscarriages don't feel shameful or isolated.

"I felt lost and alone, and I felt like I failed, because I don't know how common miscarriages were," Obama told ABC News. "Because we don't talk about it. We sit in our own pain, thinking that somehow, we're broken. So that's one of the reasons why I think it's important to talk to young mothers about the fact that miscarriages happen."