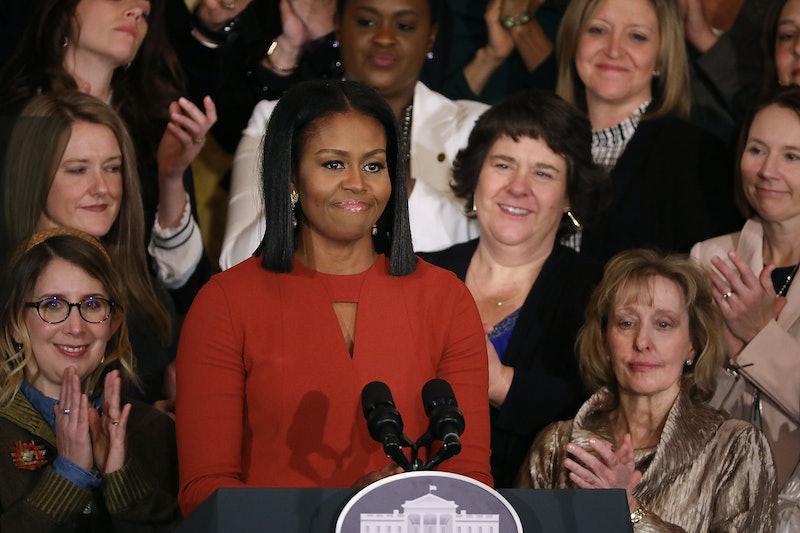 On Thursday, former First Lady Michelle Obama posted a photo of herself that raised some eyebrows. It depicts Obama and an anonymous white woman talking to each other in a nondescript building, and nothing looks terribly out of the ordinary — except for the huge signs hanging above the two women, which read "WHITE" and "COLORED." Was the former first lady in a racially segregated building? Isn't segregation illegal? What exactly is going on in that photo?

Yes, segregation is illegal, and no, Obama didn't stumble into a business that was trying to break the law. In fact, she was visiting the Brown v. Board of Education Historical Site, a museum in Kansas devoted to commemorating the end of legal racial segregation in U.S. public schools. The signs above her head weren't the building's current policy, but rather, a reminder of how many U.S. schools operated before the Supreme Court stepped in and deemed segregation illegal in the education system.

"Remembering those who have made possible the dreams of today," Obama wrote in the caption to the photo. "Will never forget. Will never stop honoring their legacy. #tbt#brownvboardofeducation."

Brown v. Board of Education was a 1954 Supreme Court case in which the court determined that it was unconstitutional for public schools to segregate students based on race. It's considered both a landmark court ruling in its own right and a pivotal moment in the American civil rights movement.

In the 1896 case Plessy v. Ferguson, the court had held that racial segregation was constitutional so long as the separate facilities for black and white students were of equal quality (hence "separate but equal"). "If one race be inferior to the other socially, the constitution of the United States cannot put them upon the same plane," Justice Henry Brown wrote in the ruling, which paved the way for the widespread segregation of U.S. public schools.

Fifty years later, lawyers from the NAACP challenged separate-but-equal laws, and the result was Brown v. Board of Education, which effectively overturned the ruling in Plessy v. Ferguson.

Although state-sponsored segregation is a thing of the past, the court battle over separate-but-equal has quite a bit of contemporary relevance. In January, when President Trump attempted to ban citizens from several Muslim-majority countries from entering the country, it was the courts that stepped in to block him, just as the courts stepped in to ban racial segregation six decades earlier. In both instances, the judicial branch that protected civil rights when the other two branches of government failed to do so, and given the trajectory of the young Trump administration, we may see more of that in the months and years to come.