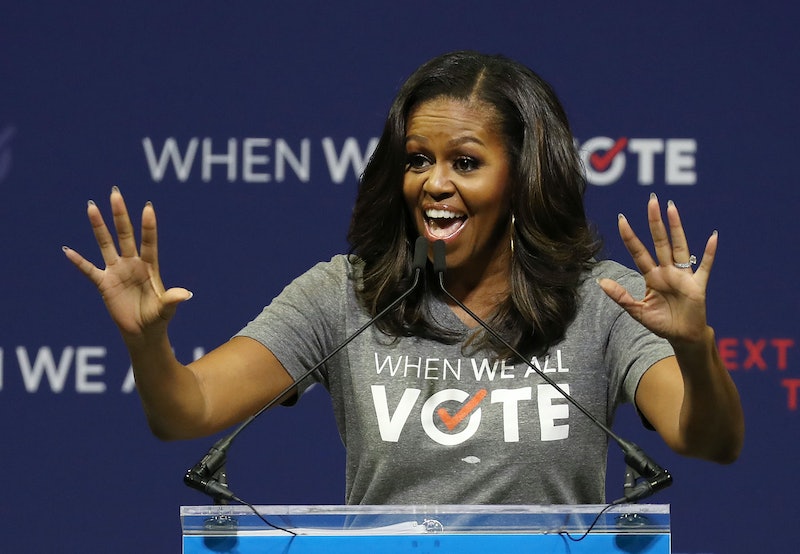 Ahead of the upcoming midterm elections, a former first lady is making the rounds and rallying the public — no matter what political persuasion — to vote. During an interview with BET's Angela Rye, Michelle Obama revealed her earliest voting memory and credited her father for her early civic enthusiasm.

"When I was little, my father — first time I went to vote was with him," Obama said, describing her father as a precinct captain who had multiple sclerosis, a disease that can cause nerve damage disrupting communication between the brain and the body.

"He walked with crutches for all the time that I've known him, so it was hard for him to get around," Obama continued in the interview. "But now, looking back, the notion that a man with a disability, no matter what was going on — rain, snow, pain — he voted."

Obama launched an initiative called When We All Vote earlier this summer to encourage young people to head out to the polls this November. The nonpartisan voter registration drive is geared toward making sure that “every American casts their ballot this November.” Obama said her father first inspired her to see how important the voting process is.

Midterm elections always generate lower voter turnout than presidential elections. Only a little more than a third of registered voters nationwide actually cast a ballot in the last midterm elections, the lowest share since 1942, according to The New York Times.

Obama's shared that she's been driven to encourage voter participation by "knowing that there's still millions of people out there who don't vote." She called the statistics "pretty astounding," and cited the example of 2008, the year her husband won his first presidential election.

"In 2008, when we were running, there were record numbers of people voting," the former first lady said. "That was in a presidential election. But even then, with records set, there were still 80 million people who didn't vote."

Obama has appeared at various When We All Vote events across the nation in the past couple of months, urging people to take control of their civic participation and cast their ballots.

"While we tune out, other people are tuning in and that's how our process works. That's how we make change," Obama stressed in the interview. She added:

Obama has worked with former White House advisers and celebrities like Tom Hanks and Janelle Monáe to push back against possible voter cynicism in the midterm elections. In late September, she rallied thousands in a Las Vegas crowd as she spoke on voting rights, education, and the danger of complacency, an issue she brought up again during her BET interview.

"I think this is something we have to be talking about all the time, every day," Obama said, "because we can't just afford to have such large percentages of the population sitting out of these decisions that affect our lives every day."